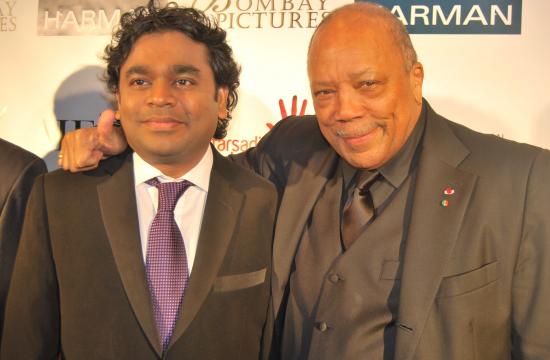 One of America’s greatest musical legends joined some of India’s biggest musical stars at the Fairmont Miramar Hotel & Bungalows in Santa Monica on Saturday, Dec. 10, to help the American India Foundation (AIF) raise money for children of Indian farmers.

Thanks to their presence, nearly 500 people filled the main ballroom at the hotel, which helped the non-profit raise more than $550,000 for Indian schools.

The evening gala was dedicated to AIF’s “Learning and Migration Program,” or LAMP, an initiative focused on educating “children in areas of high seasonal migration.”

AIF also commemorated more than a decade of community service at the fundraising event.

Rahman, who received the “Spirit of India Award” at the dinner gala from Jones, said AIF had been instrumental in allowing Indians in the United States serve the less fortunate back in the motherland.

“They’re doing great work for the needy people of India,” said Rahman, who has won both Grammy and Golden Globe awards.

Just the same, Dinesh Paliwal, recipient of the “Corporate Leadership Award,” also acknowledged the great work AIF had done during the past decade.

“(AIF’s) work over the last 10 years with the most disadvantaged in India is an inspiration to me,” said Paliwal, the Chairman, President, and CEO of Harman International. “AIF’s goal to use the power of a digitally connected world to equalize opportunities for the disadvantaged and the impoverished in the U.S. and India through education is a tremendous and … worthwhile pursuit.”

Presenting the awards to both Paliwal and Rahman, Jones spoke about his many memories in India and Pakistan, as well as the significance an organization such as AIF that helps so many from its community service.

“I’ve long held a deep admiration for the indelible spirit and independence of the people (of India),” said Jones, who served as the Honorary Gala Chair.

He said AIF had been vital in providing direct assistance to more than one million people in areas such as education and health care.

“The collective is always more important than the individual,” he said.

Jones’ affection for Indians and its culture were on full display during the evening’s entertainment segments, which included dance performances by classical Kathak artists Amrapali Ambegaokar and Astha Dixit.

A number uniquely crafted for and dedicated to AIF highlighted Ambegaokar’s two-item performance. Meanwhile, Dixit enthralled with Kathank during an item for nearly 15 minutes.

The group’s LAMP initiative has, according to AIF, “reached 250,000 children of seasonal migrant laborers and others in 320 villages and urban slums” and “will provide a high-quality education to an additional 36,000 children in the coming year.”

Since seasonal migrant workers are rarely able to establish any sort of permanent residence, oftentimes their children are unable to receive a proper education, according to AIF.

Even more, the children of migrant workers often join their parents in the field “under hazardous conditions.”

Through LAMP, the non-profit organization hopes to provide an education to these children, many of who may be the first in their respective families to ever go to school.

Those who donate to AIF may help the organization fund the construction of hostels, provide bicycles to schoolgirls, build libraries, or supply communities with teachers and computers.

As for long-range vision, AIF hopes to rely upon LAMP to both expand the group’s reach while also providing greater access and quality resources to the children it aims to assist.