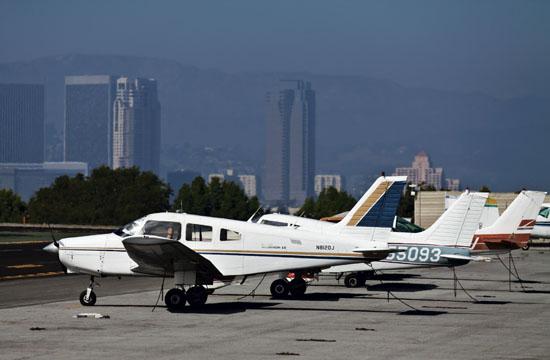 There is no safe level of pollution – that was the concept community members an expert witnesses expressed at a public hearing presenting scientific studies on pollution stemming from Santa Monica Airport (SMO) on Wednesday night at the Felicia Mahood Senior Center in West Los Angeles.

Hosted by Senator Ted W. Lieu, the public hearing allowed residents of both the City of Santa Monica and the City of Los Angeles to “review local, regional, and federal air studies” and perhaps determine what can be done to clean the air and reduce pollution surrounding SMO.

Also attending the hearing was Los Angeles Council member Bill Rosendahl, who represents the portions of the L.A. most affected by SMO, including Venice and Mar Vista.

It was the first-ever public hearing involving the Senate Select Committee on Air Quality focused specifically on SMO.

“Scientific studies clearly show that it may be unsafe for residents to breathe the air near Santa Monica Airport,” said Lieu, who is the chair of the Senate Select Committee on Air Quality, citing the reason why the public hearing was called.

With close to three hours of expert witness testimony, two community presentations, and nearly 15 concerned residents of Santa Monica and Los Angeles commenting to Lieu about the negative impacts of SMO, the public hearing may influence potential legislation regulating the small airport straddling the southeastern border between the two cities.

Many of the resident speakers called for the closure of SMO.

Some statistics shocked the nearly 200 people at the public hearing. Attendees heard that an estimated 150,000 people live within two miles of SMO while nine preschools and daycare centers are located within one mile of the airport.

Expert witnesses discussed the health impacts of black carbon, which regularly emanates from SMO. Black carbon, in a report distributed at the public hearing, is “associated increased rates of respiratory and cardiovascular disease, including asthma, bronchitis, and increased risk of sudden death.”

Overall, the biggest concern was how close SMO is to residences, with homes in the vicinity of 300 feet away from the runway. Such proximity could increase the likelihood of individuals suffering physical harm – and potentially death – from the jets flying in and out of SMO.

“I like airplanes. I support aviation. But that doesn’t mean we treat our airports equally,” Lieu said. “Some of them have issues. (SMO) is the closest to a residential neighborhood of any airport in the United States. I believe … there is a problem here.”

Meanwhile, Rosendahl urged the hearing’s attendees to not be pushed around by the federal government. While the Federal Aviation Administration (FAA) regulates air traffic, the councilman said at the end of the day, the entity is an extension of Congress should not be feared as an absolute power.

“The FAA is just the pit bulls for the policymakers,” Rosendahl said. “Don’t let them kid you, ever, that the FAA is anything.”

Nearly two-thirds of the audience at the public hearing were Los Angeles residents, a vast majority of those living in Venice or Mar Vista; about one-third of the audience hailed from Santa Monica.

According to the SMO background package provided by Lieu, SMO was home to about 105,000 flight operations – landings and take-offs – in 2010, with propeller aircraft accounting for nearly 82,000 of those flights, Jets constituted about 13,000 of the flight operations.

Even more, about 60 percent of SMO’s flight operations in 2010 were from aircraft piloted by non-residents.

Other issues residents and community members raised included extended idling times of jet aircraft and an increase of “high-polluting jet aircraft” from 1,000 per year in 1984 to reportedly tens of thousands today.

SMO is reportedly the “busiest single runway airport in the nation,” with an airsttip that measures 4,987 feet long by 150 feet wide.

No decisions or policy-making took place at the public hearing.

The Senate Select Committee on Air Quality is a policy-making committee. It will consider both possible legislation and other alternatives to reduce negative health impacts stemming from SMO in 2012.