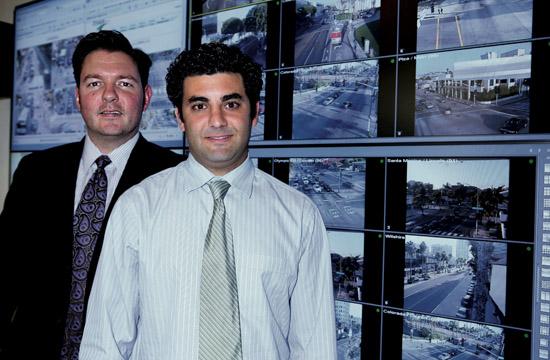 Perched above more than a dozen of Santa Monica’s busiest intersections is CCTV cameras and video detection cameras with the purpose of keeping a close eye on traffic flow and accidents.

The cameras are linked to the City’s new Transportation Management Center in City Hall, which celebrated its grand opening last month. Its goal is simple – facilitate the safe and efficient movement of cars, people, transit, and bicycles within the City of Santa Monica.

Downtown Santa Monica was the first area to be connected to the Transportation Management Center in September 2008, which includes a total of 51 traffic signals, 17 CCTV cameras, and 20 video detection cameras. All of these can be viewed, controlled, and managed in the Transportation Management Center. Previously, engineers had to physically visit a control box at each intersection to make any tweaks.

By the end of this month or early next month, it is expected an additional 35 traffic signals, 10 CCTV cameras, and 15 video detection cameras will be connected along the major transit corridors of Wilshire, Santa Monica, and Pico Boulevards.

Andrew Maximous, Transportation Engineer, said the CCTV cameras were able to pan, tilt, and zoom. He said they were used only for monitoring purposes, not recording.

“If there’s a traffic problem, we can check the cameras before we go out there,” Maximous said. “If we make changes (such as the length of a green light), we can verify the changes are done properly.”

While he stressed the new center will not put an end to the City’s traffic woes, Maximous said it would minimize traffic impacts to emergency response, public transportation, and buses.

He said this is achieved by tweaking the length of green and red lights at major intersections to manage traffic during peak travel times, special events, holidays, and traffic accidents.

The second type of camera now hooked up to the new Transportation Management Center is dedicated video detection cameras. These are fixed and are designed to only detect the presence of cars in each lane.

Maximous said these cameras would slowly replace the traditional method of loop wiring in the ground that previously triggered the signal to change when a car was detected above the surface of the road, for example, sitting at a red light in the middle of the night when there is no traffic around.

“Now we’re switching to exclusively using video at all of our intersections to detect cars and bicycles,” he said. “It’s a pretty versatile tool. If you tear up the street for a resurfacing project, all your loops are gone and you have to get a contractor re-do it.”

With the video detection technology, loop wiring would never have to be installed or replaced again, which will save the city money in the long-term, Maximous said.

“If you look here at Second and Colorado, you’ll see a sign ‘To request green, wait on this symbol,’” Morrissey pointed out. “We have that same symbol at Lincoln and Arizona. When a bicyclist stops in the zone, you’ll see a special box light up on our screen just for them, and that triggers an extra amount of green time for them to cross the street.”

The next project for Transportation Management department is the implementation of large parking display signs in various locations throughout the city that notify motorists how many parking spots are available in each of the city’s parking structures.

Morrissey said these signs would all be linked to the new Transportation Management Center.

“It’s a project that’s under design right now to help direct people to more available parking primarily on the beach and eventually in the downtown area,” Morrissey said. “There will be some larger signs at the freeway off-ramps and entrances to the city. All of that will tie in here and we’ll be able to manage that as well.”