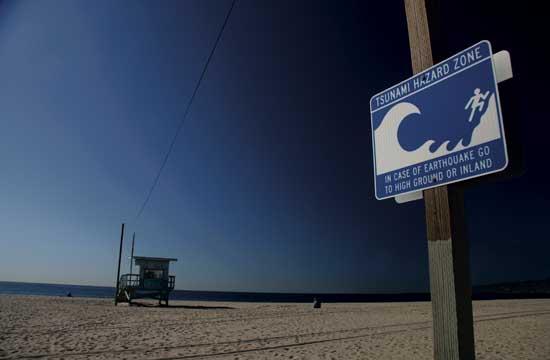 It is no secret Santa Monica is connected to one of the most active earthquake zones in the world. If a major earthquake were to strike close or off the coast, it could very well result in a tsunami.

To ensure the city is prepared for a potentially catastrophic disaster rooting from the Pacific Ocean, the Santa Monica City Council directed staff to move forward with implementing the Tsunami Response Plan presented to the dais as part of a study session on Tuesday.

City Hall identified portions of Santa Monica as residing within a “Tsunami Inundation Zone,” which include: All local beaches; Palisades Beach Road; the Annenberg Beach House; portions of the city along the northwest coast from the Santa Monica and within the bluffs to Pacific Palisades; and, the areas south of the pier toward Venice and east into Fourth Street.

“Tsunamis, though infrequent in the State of California, are highly dangerous and can potentially cause the loss of life and property damage,” Emergency Manager Ken Semko said. “California is at risk of tsunami damage from events that happen within a few minutes of warning or several hours of warning.”

Semko said most of Santa Monica would be safe from a tsunami and the city would not experience the level of devastation witnessed in Japan and other recent locations struck by tsunamis.

As a worst case, Semko said only select areas closest to the ocean would be adversely affected by a tsunami.

If a tsunami potentially struck Santa Monica and the local communities, the distance of the event with relation to the city would determine the notification system.

A “near source tsunami” is one where a tsunami would take place minutes after an earthquake. In such a scenario, the earthquake itself is the warning.

However, in a “distant source tsunami” one that may be “generated from distances up to several thousands of miles from Santa Monica.”

When a distant source tsunami is generated, the West Coast and Alaska Tsunami Warning Center would contact the Los Angeles County Office of Emergency Management and local police and fire in Santa Monica and Los Angeles.

“Depending on the distance, there will likely be several hours in which to prepare for the event,” Semko said.

The distance would dictate evacuation and communication procedures, with the Santa Monica Police Department responsible for evacuating those directly living within the tsunami inundation zone.

Signage would be key to the evacuation right, Semko said.

“The community would follow posted evacuation routes out of the inundation zone,” he said. “Evacuation route maps would be made readily available to residents and businesses immediately following implementation of the Tsunami Response Plan.”

A database of landline telephone numbers across the city “is capable of disseminating thousands of notifications in a short period of time” and, in times of emergency, would be able to contact all landlines at once.

Also assisting with communication is SMPD, as officers would be deployed to reach out to Santa Monicans via “public address systems, bullhorns, and sirens to notify those located within the designated tsunami inundation zone.”

Door-to-door notifications are also an option, as are communications through television, radio, social media sources, and other media resources.

While notifications, evacuations, and communications are all vital elements of the Tsunami Response Plan, City Hall also plans to do conduct public outreach in order to “educate all those who live, work and visit Santa Monica, about overall tsunami risk and the newly adopted plan.”

“Outreach efforts would also include the distribution of information and accompanying materials through local print and web media,” Semko said. “Staff would also begin the installation of tsunami evacuation route signage in the City’s tsunami inundation zone.”

During the council meeting, a pair of residents applauded the Tsunami Response Plan, but also offered recommendations on how it may be more effectively implemented.

Reina Alvarez suggested installing sirens or having a backup system in place should any portion of the proposed plans fail.

Meanwhile, Michael Toney recommended a breakwater be built in front of the pier to help mitigate or control the landing of a potential tsunami on Santa Monica’s shores.

Council member Bob Holbrook also supported the use of sirens or foghorns. However, staff responded that sirens are both costly and difficult to maintain.

Mayor Pro Tem Gleam Davis cautioned against relying upon modern telephones, many of which require electricity that may not be available in an emergency.

“This is a very real concern for us,” Mayor Richard Bloom said of the prospects of a tsunami striking Santa Monica and the significance of having a response plan in place. “We are well advised it seriously.”