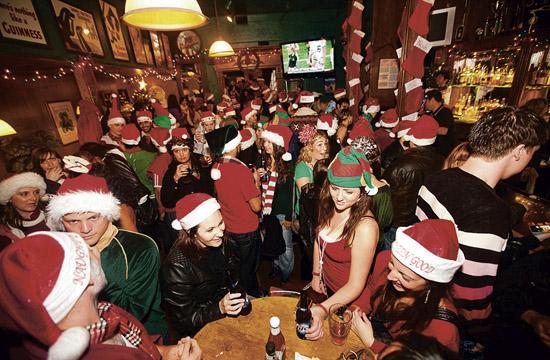 Last year, more than 3,000 people participated in the event that features more than two dozen local bars and restaurants to help raise money and food for those in need through the Westside Food Bank.

This year, crawlers pay a $10 donation/entrance fee for a special wristband, which allows them access to the drink and food specials at each official location, entrance to the Official After Party, and entry into a massive raffle to win dozens of amazing prizes.

The Pub Crawl will include four routes featuring bars on Wilshire, Fourth Street, Broadway, Main Street, the Pier, and the Third Street Promenade.

“Everybody is usually dressed up as Santa or an elf and they basically go from bar to bar down Main Street, Wilshire, and Abbot Kinney,” said Lee. “We are the sign-in part of the pub crawl for Main Street (and this is where) everyone comes to get their wrist bands. The people who run the pub crawl will be selling the wristbands for the pub crawl at O’Brien’s.”

Genevieve Riutort, Director of Development for Westside Food Bank, said it was honored to be the beneficiary for the annual SANTA Monica Pub Crawl.

“The event engages the entire community, generates awareness about the critical issue of local hunger and helps us provide for meals for local families in need,” Riutort said.

To avoid lines, the second way is to collect wristbands in advance by bringing in a minimum of five canned food items per person to the Westside Food Bank today, Friday Dec. 11, between 10 a.m. and 5 p.m. It is located at 1710 22nd Street. Santa Monica.

The map with the four routes is available at http://santamonicapubcrawl.com/wp-content/uploads/OfficialMap.pdf.