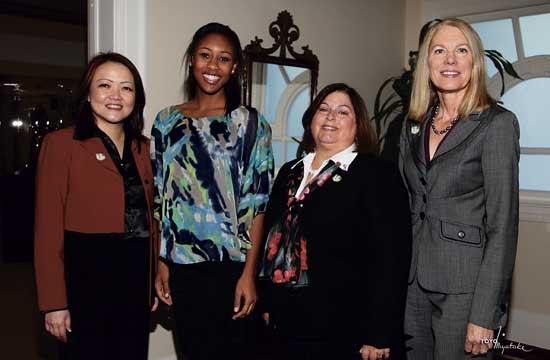 The 2012 Tournament of Roses Parade is quickly approaching and one Santa Monica resident is counting down until she rides on the Girl Scout’s 100th Anniversary Float.

Gail Boyle, a Union Bank Senior Vice President, found out in September she would be among a handful of former Girl Scouts riding on the float after senior bank executives were asked to write an essay about how Girl Scouts helped contribute to the women they’ve become today.

“For all of us, everyone’s tone was thank you for allowing us to think about Girl Scouts,” Boyle said. “It was a thought provoking experience for those who submitted essays. It was like going down memory lane of what you did as a Girl Scout and how strong the values are, how strong the skills are, and how many successful women out there were Girl Scouts.”

The Girl Scouts have a special meaning for Boyle, whose connection to the organization spans three generations, beginning with her mother Ruth Ireland, 83, of El Cajon near San Diego.

Boyle’s family came to the United States in the late 1930s.

As a Jewish family living in Germany at the time, life had become increasingly uncertain, so the family gladly accepted when an American relative offered to sponsor their immigration. They left everyone and everything they knew to travel by boat to America in the hope of a better future.

The family of four came to New York and ultimately settled in Washington, D.C., where Ruth joined the Girl Scouts organized by the local Jewish Community Center.

Like her family, Ruth wanted so much to learn and embrace the customs and traditions of her new country.

She found a welcoming community in the Girl Scouts, which enabled her to embody everything that was American, including a historic visit to the White House in June 1942 for the B’nai B’rith Council’s gifting of an American flag for President Franklin Delano Roosevelt.

During the flag presentation, Ruth proudly represented the Girl Scouts in uniform.

“The Girl Scouts gave my mother a safe place to learn about our culture and it gave her a lot of pride,” Boyle said. “The organization was so important in helping her thrive as a real American young woman who could assimilate and ultimately become a successful scientist and then a full-time mother in California.”

Just as the Girl Scouts had enriched Ruth’s personal growth, Boyle followed her mother’s path and joined the organization as a young girl in Riverside. There, she flourished and earned more badges than anyone in her troop.

“I learned that if I broke down the tasks and enlisted the appropriate support, I could achieve my goals and it was quite rewarding,” Boyle said.

Boyle especially enjoyed Girl Scouts camp, which opened up a whole new world. It was her first taste of independence. She relished the opportunity to explore, sleep outdoors, gain camping skills, and learn to adapt to a variety of situations.

Her Girl Scouts adventures were so memorable, that she wanted to pass them on to her daughter Sarah and started a troop in her region.

She was thrilled that Sarah could benefit from the important life lessons that she and her mother Ruth had gained and cherished the opportunity to share the Girl Scouts camping experience with her daughter.

“I think the Girl Scouts helped my mother learn about the American culture, taught me how to set objectives and move toward them with confidence and gave Sarah the independence that led her to live abroad and seek a career that requires language, science and art as she pursues a winemaking degree in France,” Boyle said. “The nurturing environment at the Girl Scouts helped three generations of women in my family begin our journeys toward promising futures. For that, I am grateful.”

Boyle said she recently visited Fiesta Parade Floats where the float is under construction in preparation for the Jan. 2 parade.

Girl Scouts of Greater Los Angeles, who is hosting the 100th Anniversary Float, has invited every Girl Scout and former Girl Scout to dedicate a float flower in celebration of their fond Girl Scout memories. Each $5 donation toward the float will be accompanied by a name of the donor’s choice, which will “ride” the float with Boyle and other Girl Scouts and Girl Scout Alumnae riders.

More information can be found at www.girlscoutsLA.org.