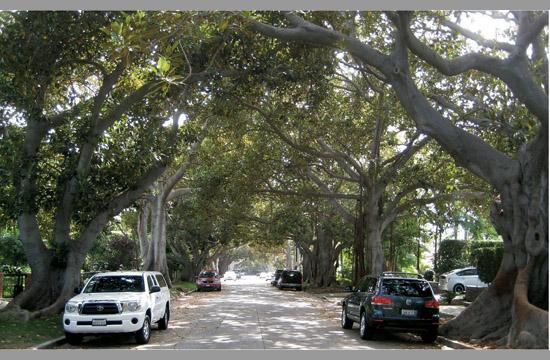 After countless hours of internal and community meetings, the Urban Forest Master Plan and a related Community Forest ordinance were both unanimously passed by the Santa Monica City Council at its final meeting of 2011 last Tuesday.

Accordingly, a whole new generation of trees will be making their respective ways to Santa Monica and, once planted, will change the face of many local streets for the next 50 years.

Even more, the Master Plan may open the door for Santa Monica to be designated as a citywide Arboretum.

Community and Cultural Services Director Barbara Stinchfield, who retires from her post on Dec. 29, presented her final staff report after 31 years of service to Santa Monica.

“We learned the community cared deeply about their streetscapes and the streets that lined their neighborhoods,” Stinchfield said.

She added that “Santa Monica’s forest is an aging forest” and “it is in a period of transition.”

At least 1,000 trees must be planted by March 2012 in order to maintain and satisfy an Air Quality Management District (AQMD) grant. An extension might be requested if the city would be unable to plant 1,000 trees in essentially 90 days.

As per the plan, the re-forestation process will include street tree removal and relocation.

“The proposed Master Plan outlines strict inspection and risk assessment criteria for the removal of street trees and a revised tree removal process that provides specific procedures for assessment of street trees to ensure they meet the approved removal criteria,” a staff report stated.

“The proposed Master Plan outlines a separate process for determining tree relocation and tree removal in public improvement projects conducted by the City. This process includes incorporation of existing healthy trees in the project’s design wherever consistent with the project’s design objectives.”

Also included in the Urban Forest Master Plan were street tree designations, which focused on “replacement recommendations for all 394 street segments in the event tree removal is necessary or when tree vacancies are to be filled.”

The street tree designations were a source of some controversy among residents, as it called for palm trees to be replaced by another species along four streets within Santa Monica, including Marguerita Ave. and 18th, 19th, and 20th streets.

A timeline for implementation is still in the works.

In June, a “Street Tree Species Selections” workshop was held at the Santa Monica Main Library as part of the city’s plan to ensure the long-term health of Santa Monica’s urban forest.

There are about 83,000 trees in Santa Monica today, according to City Hall.

For detailed information on specific tree species included as in part of the plan, as well as the tree designation list, visit www.santamonicatrees.com.