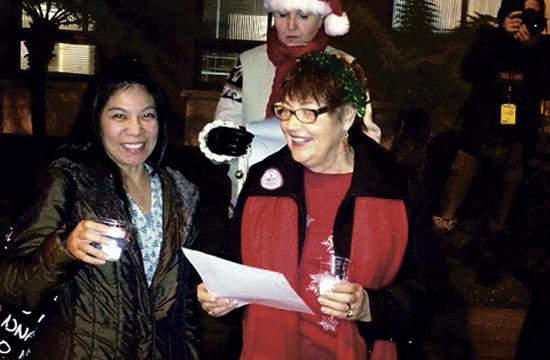 Registered nurses (RN) from Saint John’s Health Center gathered for a candlelight vigil last Monday to draw attention to their seven-month efforts to negotiate a contract with hospital administrators.

In May 28, 2011, a decade after a first unsuccessful attempt to unionize, the RNs of St. John’s voted 269-149 to join the California Nurses Association (CNA).

The nurses have only five more months to approve a contract before St. John’s administration can file to decertify last May’s election results.

In 1942 at the height of WWII, the Sisters of Charity of Leavenworth built St. John’s to fill the need for a community hospital in Santa Monica.

St. John’s RNs say that a once-high standard of patient care has fallen by the wayside as new management has prioritized economics.

Gerry Daley, a labor representative from CNA, said last Monday’s vigil served as a reminder of the patient care issues the nurses are advocating to improve.

St. John’s administration calculates the ratio by including volunteer or traveling nurses along with their RNs, an approach, Daley said, that differs from every other hospital in California.

“This is not a place to cut corners,” Daley said.

A 2010 study by Health Services Research found that “hospital nurse staffing ratios mandated in California are associated with lower mortality and nurse outcomes predictive of better nurse retention in California.”

Donna Schonlaw, who was born at St. John’s and worked at the hospital for the past 23 years, said she faced severe understaffing in the Pre-Op department where she works.

“People are being put in harms way because of financial choices being made,” she said. While Schonlaw added that nothing catastrophic has happened yet, she said she is constant challenged by not having enough time to do what is needed.

“I want to see safety maintained for patients and for nurses. That’s why most of us have fought for so long,” she said.

A survey on patient satisfaction conducted by U.S. News & World Report found that 74 percent of St. John’s patients would definitely recommend the hospital, a few points above the national average of 69 percent.

However, the survey also found only 43 percent of the patients said they received help as quickly as they needed it. Nationally, the average was 64 percent.

Lou Lazatin, President and CEO of St. John’s, and Dawna Hendel, VP for Patient Care, did not respond to repeated requests for comment.

St. John’s RNs are also advocating provisions to prevent nurses from injuring themselves while lifting patients.

A law signed by Gov. Brown mandates that all hospitals have proper equipment and a team dedicated solely to lifting patients by Jan. 1, 2012.

St. John’s nurses want to incorporate the language of the new law into their contract to ensure that it is enforced, but hospital management has been unwilling.

Lori Hammond, an RN at St. John’s Labor and Delivery department for more than 32 years, said she and many of her colleagues have suffered back injuries because of their work.

Hammond said St. John’s has provided only one person to meet the state requirement for a team of lifters available at all times. She added that new lifting equipment, which management said they had ordered last summer, was still not here.

Daley said a handshake agreement was not worth a paper one.

“We need them to sign it, and so far they’re not doing it,” Daley said

Seven bargaining meetings have already occurred. Four more negotiations are scheduled for January. The next meeting will take place on Jan. 13.

In a deliberation on Dec. 20, tentative agreement was made on grievances and arbitration. The RNs agreed to not to “threaten or participate in any strike, walkout, slowdown, … or other work stoppage.” St. John’s agreed not to institute any lockouts.

Almost half of the hospital’s nursing staff has been hired since 2006, Hammond said.

“It’s easy to leave. Many nurses have done so,” she said. “I’ve chosen to stay and make this place better. We don’t want to walk away from it.”