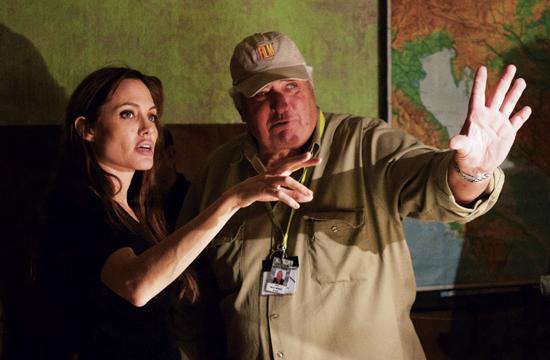 What can you say about Angelina Jolie that hasn’t already been said? She is the most famous, most photographed woman in the world whose significant other, Brad Pitt, is equally as famous as both an actor and activist.

In addition to this award-winning actress’ films generating big box office dollars, her humanitarian activities are legion and have culminated in her debut as writer/director/producer of “The Land of Blood of Honey,” a compelling story set against the backdrop of the Bosnian War. Jolie’s film will honored with the 2012 Producers Guild of America’s Stanley Kramer Award as well as having received a Golden Globe nomination for Best Foreign Language Film.

Jolie recently sat down with a select group of journalists and the following interview has been edited for continuity and print purposes.

What is the genesis of “The Land of Blood and Honey?”

Jolie: When I first started traveling years ago, and went to a few countries, I was very emotional about what I saw and it changed me as a person and as a mother. Then I went through a period of getting very angry and tried to understand what was happening and how to fight against it. So it’s been an evolution for me but I never expected to make this movie. I quietly sat alone and thought I had written journals and op-ed pieces, but wanted to see if I could write a project where I could study what happens to human beings through war so I could have a better understanding and better figure out how to help. It gave me purpose to watch documentaries and to read books and watch news footage and to visit the region and spend time with people. I never thought that this was going to be a feature. I was doing this research for learning purposes.

This was an extremely ambitious project. Did you follow your own creative instincts and did you fully understand what you were getting into?

Jolie: If I only knew (laughter). Somehow, in my mind, the script was very much in these rooms. Then when you have to accurately depict war, things start to get bigger and bigger. First we sent the script, without my name on it, to people from all different sides of the conflict, including Bosnians, Serbs, Croatians, and Muslims, and decided that if those people could agree on the same story, and would participate, there would be a purpose in making the film. If they did not agree, there would be no project. Many of them lived through the war and told me their personal stories that were eventually incorporated into the script. I met a woman who was held captive and was used as a human shield and was forced to watch older women dance naked in front of soldiers, which is one of the scenes in the film.

Was Brad involved in the film and did you use him as a sounding board?

Jolie: He was the first person to read the script and probably if he had said something negative, we wouldn’t be here today (laughter). I showed it to him as this kind of private experiment. He took it with him to Japan and called me and said, “It’s really not that bad – it’s really pretty good.” We talked further about it and he encouraged me throughout the whole process. He came to the set most days and did some still photography. He was always around and always supportive.

How much of a challenge did you have writing these foreign characters, all of whom are very well developed?

Jolie: I was able to flip the characters in my head as though I was playing the different roles. You have to inhabit the characters and write from their individual voices. I tried to keep it clean without any extraneous dialogue. There was a lot of silence and a lot of tension so I tried to keep the writing simple and pure. Since the region is very complicated, the authentic language had to be translated by different translators. It couldn’t be just a Bosnian or a Muslim or a Serb because the translation could be slanted to one side or the other. So the final translation had to be agreed on by all sides.

What was your directorial style in working with the actors?

Jolie: When the scene was done in their native tongue, I couldn’t understand everything that was being said, so I would check with the actors to make sure the scene worked for each of them. For example if Danijel (Goran Kostiç) had a big scene, I would pull Zana (Marjanoviç who played Ajla) aside and say that it feels right for me emotionally, but text wise was there anything that I needed to know. As a director, I gave them what I always felt I needed when I was working as an actor – safe spaces, respect, sensitivity to their craft, and trust. For example, in scenes where Zana had to deal with sensuality or nudity, I made sure to be very considerate and only put in the film what was necessary for story telling and would try to protect the actors from the crew and the noise.

Did you give your direction through a translator?

With members of the cast from all sides of the political conflict, what was the first day of shooting like and were there any confrontations that you had to deal with?

Jolie: From the interview process, I knew they were all very intelligent very open, and thoughtful people, and knew they all had the same goal. During the interviews, even though they were all divided, they all said they were Yugoslavian. Actually, everyone took a pay cut because people wanted to work on a film that had some meaning. Anyway, I was a little nervous on the first day because we had to shoot one of the hardest scenes, which is the scene where the women are taken off the bus and raped. The actors in that scene are a mix of Bosnian, Serbs, and Muslim men. But in some ways it was intentional to shoot that scene first because it was either going to spark all these emotions immediately or it was going to do something else. What happened was as soon as I called ‘cut’ for the first time, Ermin Bravo, who was played the aggressor Mehmet, who rapes Esma, picked up Jelana Jovanova (actress playing Esma) and gave her the biggest hug and apologized. She hugged him back and all the men who had ripped the earrings and jackets off the women put them back on them and apologized. They took care of them and brought them tea to make sure they were okay. By lunchtime, there was so much kindness because they were confronting, through this story, the ugliness of the past. So the experience actually created some beautiful friendships. I just saw all 16 of them in New York a few days ago, and to see them together had great meaning to me.

Did your maternal instincts serve you as a director?

Jolie: Probably. As a mother you’re always answering somebody for something (laughs). When you’ve got six kids you’re just used to “okay what’s next or what else?” So I think the natural multi-tasking that comes with being a mother works as you transition into a director.

The whole film is extremely graphic and being as sensitive as you are, was there one scene where you were just a rag afterwards?

Jolie: I hated the day when I had to ask the old women to strip naked. We had two cameras and I only shot it once. At the end of the take, we had robes and drinks and anything they wanted. We were actually shooting in Hungary so they were Hungarian and I was using a translator. I must have gone up to them five times and they must have thought I was crazy because I wanted to make sure they completely understood that the people inside (the soldiers) had been directed to laugh at them and they weren’t laughing at them because they’re naked, but because it was their job to laugh and they should not take it personally. I told them I was so sorry to ask them to do this, but explained that this was a very important part of the story because they were representing victims of the war who went through this and this message will affect people and that they would be doing a great service to other women. I was just wreck. What was beautiful, too, was I had to shoot some of the reactions from the soldiers as cut aways because even though the actors tried, they couldn’t laugh at the women. When I went up to the women afterwards and thanked them and told them they could go home, they talked among themselves and the translator said they wanted to know if they did something wrong. I told them they did it perfectly and could go home. But for all of us, we hated that scene because we felt like we were torturers.

What do you think you’ve accomplished with this film?

Jolie: With anything having to do with war, you walk away just so very grateful for everything you have and the safety you have, but you are also very conscious that the issues in this film are still going on today in other parts of the world – violence against women, lack of intervention, man’s inhumanity to man. These kinds of atrocities are going on as we speak so we must figure out a way to address these big issues. So, it’s a big question for us as far as what instruments of law we’ve got in place to help deal with atrocities. The film is not a solution, it’s not a political statement, but it raises those questions.

Now that you’ve gotten your directing legs, do you want to direct another film?

Jolie: It would take a really special project. I loved this film, not because I wanted to be a director, but because I’m so happy to get this story out and had this wonderful experience of working basically on a foreign film with actors from across the world. It was great getting to know them and their culture and history so it wasn’t just a film for me. I don’t know if I could put that much energy into another film. It’s a lot of work and much easier to be an actor and much nicer (laughter). I really didn’t realize how much work went into making a film.

In Part Two of the interview with Angelina Jolie in next week’s edition, she talks about her humanitarian work, how her career impacts on her children, and how she sees her future.