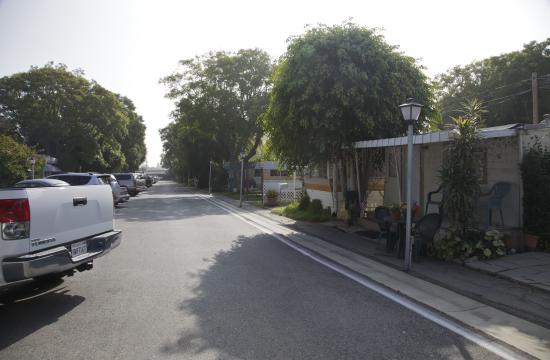 Dozens of medium sized yellow placards were distributed among the gallery at Santa Monica City Hall chambers last Tuesday night, each one reading in bold black letters “Save The Village” as council members discussed possible options for the future of the Village Trailer Park located at 2930 Colorado Avenue.

Despite the placards and a wave of emotional testimony from residents urging council members to consider exploring a way to preserve Village Trailer Park as a local “oasis” and protect its residents, a 4-3 vote from the dais merely called for City Hall to explore whether the landowner would be interested in selling the property and, if so, at what price.

With about half of the 109 units still occupied by owners of the individual units, a vast majority of the nearly 20 people who spoke to council members pleaded with them to do what they can to allow Village Trailer Park to remain as it is, rather than allowing the property to be rezoned for a new mixed-use development.

Council member Kevin McKeown brought the discussion item to the dais on Nov. 22, which was continued to the Dec. 6 meeting.

Ultimately, supporters of McKeown’s item hoped City Hall would be allowed to explore purchasing options and the property’s compliance with the Land Use Circulation Element (LUCE).

Based on how the issue has evolved at City Hall, it appears the only remaining option to preserve Village Trailer Park in its current form would be for the City of Santa Monica to purchase the land.

“The option that is left with us, and it is clearly an option of last resort – will be acquisition of the property,” McKeown told fellow council members.

Even with that “last resort” option, McKeown said it would still behoove his fellow council members to consider purchasing the property in order to preserve its history and character.

“Village Trailer Park is our city’s last independent opportunity for affordable ownership and rental housing,” McKeown said, adding many of the senior citizens who still live at Village Trailer Park do not want to – or are unable to – move.“If the residents lose the spaces on which they are parked, they lose the equity they’ve accumulated in their trailer.”

One reason the future of Village Trailer Park became such a hot topic is because the property was rezoned under the LUCE from a residentially defined parcel to an area that would be ripe for commercial or mixed-use development.

If a new development were ultimately allowed to come in, the 50-plus units and their residents currently occupied at Village Trailer Park would essentially be evicted.

Meanwhile, City Hall has argued they will do all they can to make sure the current Village Trailer Park residents will not be left for dry and be offered lateral residency options.

Among the options include Section 8 vouchers to certain properties within the city, or transitional opportunities to other affordable housing developments in Santa Monica.

City Hall has also indicated affordable housing units may be included in any future developments that would replace Village Trailer Park.

Even still, McKeown said many Village Trailer Park residents were not necessarily looking forward to any sort of change and a move to another development, be it Section 8 or affordable housing, as it would not be the same.

“Many of the people want to keep their lifestyle,” McKeown said.“They really don’t want to move into apartments or into subsidized housing of any kind. They want to be independent and live as they do.”

McKeown also pointed out that, while it may be expensive to purchase the park, the council has not made any promises to the developer to deliver a Development Agreement (DA).

Residents and supporters alike made a case to preserve Village Trailer Park as is, citing its historical value to the city and potential harm to current residents should a new development

“The trailer park is affordable housing, open space, (and) an established urban forest,” said resident Nancy Morse.“The Village Trailer Park is Santa Monica heritage, its history, a museum, and an oasis. It is home to humans, birds, plants, (and) nature.This is a unique living

community and should be a source of pride for this city.”

Another resident said any new developments in place of Village Trailer Park would be an “eye sore.”

Oscar DeLaTorre, who serves on the board of the Santa Monica-Malibu Unified School District, said moving forward with new development at Village Trailer Park would be the only one in Santa Monica that would require residents to be displaced.

Through it all, council members worried whether contemplating the purchase of Village

developers and the property owner.

Council member Pam O’Connor said the city already does all it can to protect renters.

Even more, she was concerned whether council members would establish a precedent

to allow other potentially displaced residents to plead with City Hall to intervene with development plans and consider purchasing a parcel or property in hopes of preserving it.

Still,McKeown hoped his colleagues would move forward with looking into options of how

the city could purchase the Village Trailer Park property.

housing to protect residents,” he said.“Here we have an instance where we will have vulnerable seniors who will be displaced by this development if we don’t intervene.”

staff merely look into potential valuations of the trailer park.That motion failed with

The council then voted on the main item, McKeown’s request to direct staff to seek all

options in protecting the residents of Village Trailer Park; that vote was 5-2 against, with only

Finally, Shriver recommended that as part of the Memorandum of Understanding negotiations,

city staff be directed to discuss the prospect of selling the property with the owner and at what price.

That final motion passed 4-3, with Davis, O’Connor,and McKeown voting against.

The discussion item was first discussed at the Nov. 8 council meeting when staff was directed “to explore means whereby the City can best protect the safety of Village Trailer Park residents and of the existing affordable housing, and assure that all of the City’s own

options with respect to various ongoing processes are preserved.”

About 52 units of the 109-unit mobile home park are currently occupied full time, according

to a staff report.