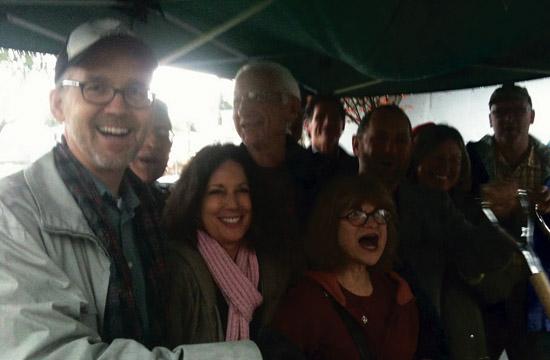 This past wonderfully rainy Monday, about 50 people from the Ocean Park community and City of Santa Monica came together at the Ocean Park Library to celebrate the groundbreaking of the Ocean Park Boulevard Green Street Project.

The initial idea for the project came from residents of the Ocean Park community.

Bob Taylor reminded everyone Ocean Park Boulevard had been redeveloped to accommodate the traffic the City thought would come with planned growth at the beach when Pacific Ocean Park was built.

But widening the street divided the neighborhood and left people without a safe place to cross.

“We have the opportunity to add modern bells and whistles to our original concept, which was designed to bring the neighborhood back together,” Taylor said

Peter James, a senior planner with the City, said the project was a gateway for Ocean Park – putting the “park” back into Ocean Park Boulevard.

“This project is not solely about making Ocean Park Boulevard a better place to bike and walk and improving water quality in the bay,” James said. “Yes, it is about sustainability and that’s important to us, but it’s fundamentally about people and their changing attitude about the role of streets in the community.”

John Kaliski, the project’s architect, believed the project was more than the design of a street.

He said it was an opportunity for creating a greater community.

“One of the joys of working on the Ocean Park Boulevard project is that the community wanted more before we got involved, demanded the best from us, and dogged all at the City to make sure that our collective vision is implemented,” Kaliski said. “I am very hopeful that the outcome will live up to all of our expectations to bring the community physically together on foot and on bicycles, create a new sense of neighborhood identity, realize heightened sustainability with regard to storm water mitigation, and craft a street and sidewalk that is integral to people’s sense of home.”

The timing is finally right, money is available for storm water capture and treatment, and for supporting bicycling as transportation. The City has made a formal commitment to sustainability. The health of the bay is understood to be essential to the economic health of the City.

Most importantly, protecting the health of the bay and being a sustainable City are demands made by Santa Monicans of their government.

Santa Monica Mayor Richard Bloom summed up the sentiment of the day saying, “This project weaves together the threads of sustainability and brings together the two sides of the neighborhood that have been split for so long.”

“Construction will last just over a year, and one lane of traffic will be kept moving in both directions at all times,” Rosales said.

As an Ocean Park resident, I’m hugely optimistic about this project, but at the same time, I also realize it is only a piece of one street. Success will really be measured by its use as a model.

For the health of the bay we have to infiltrate storm water citywide and keep polluted, pathogen, and chemical carrying storm water out of the bay.

If biking is to become a reasonable mode of transportation to offset our carbon footprint, we have to be able to travel throughout the city safely and comfortably. Every tree planted improves air quality and provides shade and beauty. Planting 100 trees is fantastic, but we need a citywide tree canopy to significantly improve air quality.

For connecting neighborhoods, for making a reality of our commitment to sustainability, we need to think about our streets differently and to put the park back, not only into Ocean Park Boulevard, but into all our streets.