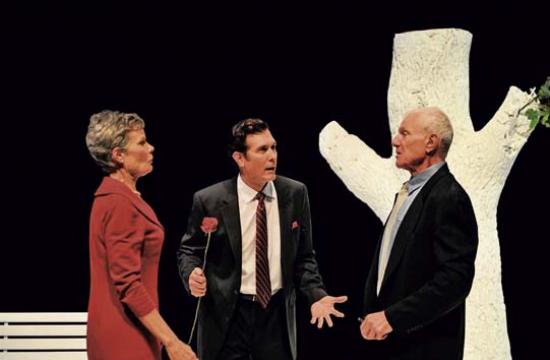 Theatre of the Absurd is a style of theater referring to a body of work written predominantly by European playwrights in the 1940s, 1950s, and 1960s. It includes such writers as Jean Genet (The Balcony, The Maids, The Blacks), Eugene Ionesco (The Bald Soprano, Rhinoceros, The Lesson), Samuel Beckett (Waiting for Godot, Krapp’s Last Tape), Harold Pinter (The Birthday Party, The Homecoming, The Room), Edward Albee (Who’s Afraid of Virginia Woolf?, Zoo Story), and Tom Stoppard (Rosencrantz & Guildenstern Are Dead). Their plays generally expressed the belief that human existence has no meaning or purpose and therefore all communication breaks down. Logical construction and argument gives way to irrational and illogical speech and to its ultimate conclusion – silence.

Performed on a stark white public park setting consisting of a leafless tree and two white benches “Awake In A World That Encourages Sleep,” on stage at the Electric Lodge, is in that tradition. Raymond J. Barry’s fascinating play, which is highly theatrical and stylized, uses clipped, machine-gun delivery of the dialogue, tackling the moral ambiguity of war as well as other serious issues with which the world is grabbling, as well as the loss of love and passion in marriage.

The play begins with a very well dressed husband and wife sitting on one of the benches. The wife, Erica, skillfully played by Tacey Adams, is dressed in a stunning red dress and holding a powder compact, is checking her hair and makeup. Adams plows through this difficult material with mercurial transitions, meeting the demands of the sometimes stream-of-consciousness thoughts and probably holds the record for the longest on-stage crying jag in theatrical history. Her husband, Paul, powerfully played by Joseph Culp, delivers a brilliantly nuanced performance, mining the depths of the many layers of his character. Impeccably dressed in a pin-stripe suit and crisp shirt and tie, he is a corporate executive and part of what is referred to as the “Group,” who we are to assume are arms dealers or something in that order. Despite being in a public place, in short order a violent argument breaks out with between them with Erica accusing him of being responsible for their son’s death because Paul encouraged him to serve his country. He defends himself and his work, insisting that his son died with honor and that he, himself, served his country and is a heavily decorated war hero, which Erica disputes. She hurls one insult after another at him also accusing him of being a homosexual. He tries to stay patient with her, but eventually storms off stage leaving her alone on the bench with her book.

It is at this point that Raymond J. Barry’s Edward character enters in a most compelling way as he a doesn’t just walk on stage, but he flits and glides and skulks, almost in Groucho Marx-type movements – hesitating, freezing for a moment and then stealthily moves a bit further towards the unoccupied bench where he commences to haltingly engage a very reluctant Erica in conversation which eventually produces some shocking surprises.

As the action moves forward, we learn that Paul was Edward’s boss who left the “Group” for reasons of conscience. Accusations fly back and forth with Paul defending the actions of his “Group.” Right in the middle of a heated argument, in the most Theatre of the Absurd tradition, Erica announces that she bought a new hat and the discussion switches to that. Throughout the play, the proceedings are interrupted as a bomb falls somewhere in the distance, a reminder that we are at war. Meanwhile, the awkward relationship between Edward and Erica heats up and all hell breaks loose as Erica confesses her needs for love and affection, which she is not getting from a very confused Paul.

In terms of the overall delivery of the dialogue, one could liken the play to an opera in that the lines are delivered either as solos (arias), duets, or trios that sometimes makes it difficult to understand all that is being said, but these actors deliver such spellbinding performances that even if you miss a few words here and there, it is immediately forgiven. This talented cast’s collective physical, vocal, and emotional lives are so wonderfully developed and riveting, that you won’t want to blink lest you miss a theatrically fascinating moment.