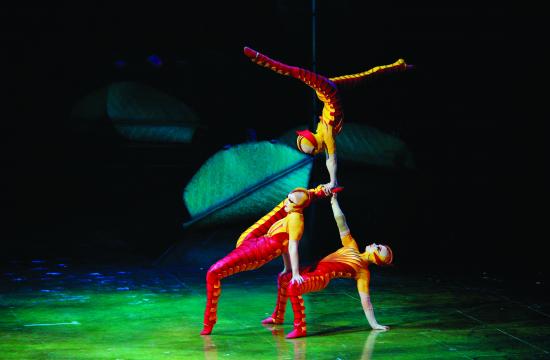 The name OVO means “egg” in Portuguese, which is why Cirque du Soleil decided this timeless symbol of the life cycle and birth of numerous insects was the perfect name for its touring show, which premiered its nine-week run next to the Santa Monica Pier last Friday night.

Graphically, OVO hides an insect in its name: The two “Os” represent the eyes while the letter “V” forms the nose.

The family-friendly production is about a day in the life of a colony of bugs. On the surface, the audience is treated to a colorful array of extravagant costumes and mesmerizing feats by a cast of international performers.

But take a closer look at each of the acts and you can see the vision, the contrasts, and the components of why each act was so important to the production written and directed by Deborah Colker.

This is evident with the “Ants” act near the beginning show. It features performers dressed as bright red ants that first foot juggle kiwis, then corn. The six performers lay on their backs with their feet stretched into the air as they use their toes to spin the cylindrical kiwis in perfect unity. They “up the ante” when they begin to pass the kiwi fruit in different patterns between each other without missing a beat.

Colker said this acrobatic feat mimicked ants in real life in the way they work in synchronicity to achieve goals.

“Sometimes you watch ants as they are bringing leaves to make their nest because they’re used to working all the time,” Colker told The Mirror. “They work together and do the same movements. They love to carry their leaves as well as their food, that’s why I made the decision to have kiwi fruit.”

In a tour-de-force performance, a spider defies gravity and physics in the “Slackwire” act with a succession of seemingly impossible feats of strength and balance as he traverses a wire that appears to give him no support.

At one point he hangs at a 45-degree angle over the ground, some 15 feet below, and he tops that with an upside-down unicycle act.

And the wire is in almost-constant motion up and down, adding to the degree of difficulty.

A Cirque show isn’t complete without aerial acrobatics. In the “Flying High” act, a group of scarabs soar high above the stage, from both edges to the middle landing on a platform. This act combines circus disciplines of banquine, Russian swing, and the swinging chair.

Colker said the aerial acrobatics were a hard technique to master.

“It’s one of the more dangerous numbers we have,” she said. “ It’s important to have because the insects can climb, they can fly, they can jump, and they can speed like crazy.”

The show is full of other insects: Yellow and red fleas fling themselves through the air in the “Acrosport” act that combines elements of dance, acrobatics, and agility; the “Butterflies” act combines hand-to-hand, ballet, contortion, and an aerial flying act where the pair of Butterflies perform a pas de deux on a rope that allows them to swoop and land, leap and fly in perfect unison; and a Dragonfly performs a graceful balancing act in and out of the slender stalks and twisting tendrils of an elegant plant. It takes extraordinary control and strength to transfer his weight from one hand to the other as he maintains equilibrium upside down on top of the foliage.

This finale act features some 20 artists running, jumping, and walking across—and straight up – a 26-foot high vertical wall without artificial support. A power track and trampolines give them the speed, lift, and momentum to take flight. Their athletic ability, physical strength, and team coordination take care of the rest.