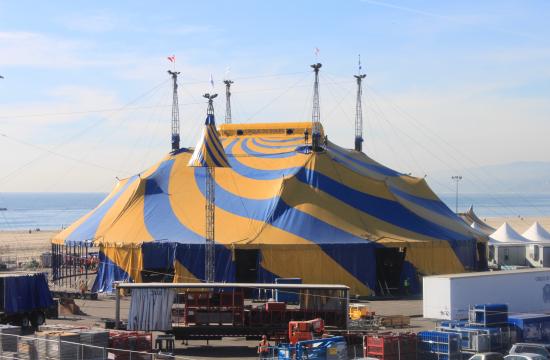 Measuring in at 66 feet high with a diameter of 167 feet, Cirque du Soleil’s Grand Chapiteau (big top) now stands tall next to the Santa Monica Pier in its final stages of construction for its two-month run of “OVO” that begins next Friday.

More than 1,000 tons of equipment has now been unloaded from 61 trailers that are part of the touring production.

Earlier this week, “OVO” company manager Rob Naumann escorted the media around the Cirque du Soleil village in the pier’s northern car park and talked about setting up the big top that has four masts each standing 80 feet tall and almost 2000 three-foot long stakes driven into the asphalt.

“With all the sophistication and technology of Cirque, what you are going to see here is all done by manpower,” Naumann said before the tent raising. “We have a little over 100 people who will be grabbing our side poles and manually be pushing them up by hand. We’ll have a few other people cranking on our winches to tighten the whole thing into a safe and secure structure.”

He said a crew of 50 permanent construction workers traveled with the show. Another 20 Cirque workers classed as “fly-ins” arrived early last week for the set-up – the same crew that helped tear down the “OVO” show in Mexico City a few weeks ago. On top of that, Cirque has also hired between 75 and 120 local construction workers daily to chip-in with the set-up, which also includes the installation of the entrance, hospitality and rehearsal tents, box office, administrative offices, and kitchen.

Now that the canvas is raised, riggers have begun to hook up winches and cables into the roof. The backdrop of the stage is a huge climbing wall, which is raised into place using hydraulics. Completion should hit the 100 percent mark mid-next week in time for rehearsals on Thursday before the show’s premiere the next day.

“There’s not a bad seat in the big top,” he said. “It’s 2500 people, but there’s no seat that’s more than 50 to 60 feet away from the stage. You see the expressions on the artists’ faces; you see the individual make-up they do. This is where Cirque started.”

This tent has been used in several productions dating back to 2006 when it was first used for the production of “Varekai” in Australia. Following “Varekai,” the tent stayed in Australia for the touring production of “Dralion” before it was packed up and flown to Montreal for the launch of “OVO” three years ago, and it’s been on the road ever since.

Naumann said the lifespan of a tent was about 12 to 15 years depending on weather conditions it has to withstand.

“The tent is pretty much the same design, the same structure, and way to raise it is the same as 100 years ago,” he said.

“It is anywhere from six to eighteen layers where they will double it over so it’s strong, it insulates from the heat or cold outside.”

OVO is a story of a day in the life of a colony of bugs that’s promoted as a headlong rush into a colorful ecosystem teeming with life, where insects work, eat, crawl, flutter, play, fight, and look for love in a non-stop riot of energy and movement.

Performances will be held Tuesdays through Thursdays at 8 p.m.; Fridays and Saturdays at 4 p.m. and 8 p.m.; Sundays at 1 p.m. and 5 p.m.; and dark on Mondays. As part of the Cirque du Soleil village, a box office will be located inside the entrance tent through a designated box office entrance, as of Thursday, Jan. 19 between 5:30 p.m. and 8:30 p.m.

Regular box office hours will be 12 p.m. – end of show Tuesday through Saturday; 11 a.m. – end of show on Sunday and will be closed on all Mondays and the following Tuesdays: Feb. 7, Feb 28, and March 20.

For more information about the show that runs through March 27, visit www.cirquedusoleil.com/OVO.