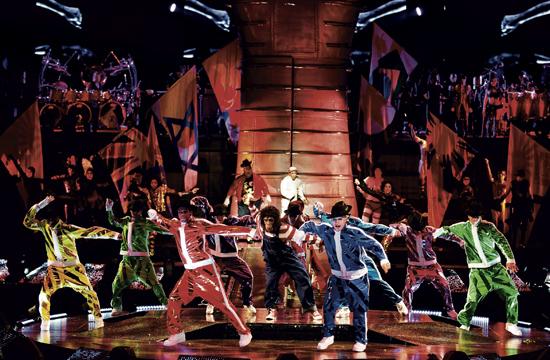 Michael Jackson fans get ready – Cirque du Soleil’s touring tribute show to the King of Pop is less than two weeks away and tickets are limited with only three performances in Los Angeles.

Michael Jackson THE IMMORTAL World Tour will take over Staples Center in downtown L.A. from Jan. 27-29 with 8 p.m. shows on Friday and Saturday and a 4 p.m. show on Sunday.

The touring show has already visited 24 North American cities, including a three-week stint at Mandalay Bay in Las Vegas in December.

When the lights of the theater dim, the audience is taken into an imaginary world inspired by Michael Jackson.

The two-hour show calls on dozens of Michael’s hits, pairing them with extraordinary feats by the cast of international performers.

The show constantly changes its pace from an early act in front of the gilded gates of Neverland, where a Mime awakens to the song “Childhood,” to a wild, high-powered number just a few acts later with “Wanna Be Starting Something,” when dancers and acrobats run up and down the Giving Tree and hurl themselves onto the stage.

In THE IMMORTAL World Tour, there are references galore to Michael Jackson’s legendary clothing.

In total, there are 252 imaginative costumes and outfits.

Gangster types have surreal guns that seem to be tucked in their pockets but are only shapes. When they pull the trigger built into their “gun gloves,” streams of pyro shoot out.

that show behind the wrappings reflect Michael’s love for horror movies.

The straps duo artists appear as magnificent swans; covered in Swarovski crystals, their costumes are corseted and laced in reference to Michael’s corseted wrist in his Black or White video.

The show’s versatile stage is highly technical with multiple lifts for scene changes. A large, multi-purpose LED screen was developed: it starts flat on the stage, stands up to act as a projection surface, turns into a ramp, and surrounds the Giving Tree like a gradient LED ramp.

In the middle of the stage, there are large drawers that serve as steps for artists to perform on.

The stage out in the house – called the B Stage or runway – is equipped with a conveyor belt, a lift, and video screen.

The projections throughout the show not only act as storytelling devices, they play a key role in making Michael’s presence palpable. There is plenty of integrated video content such as footage of Michael’s performances and real-time projections of the performances on stage.

Fans won’t be disappointed with the song selection as the range is wide and includes all the hits that are combined with the most amazing theatrical and acrobatic language Cirque du Soleil has ever put together.

From Smooth Criminal, to “Human Nature,” and “Thriller,” it’s a show you won’t forget.

An audience favorite was the Mega Mix Act, which combined “Can You Feel It,” “Don’t Stop Till You Get Enough,” “Billie Jean,” and “Black or White.”

This sequence is a fusion of music, dance, and acrobatics. During “Can You Feel It,” acrobats execute a Swiss rings act moving from stage to sky. This scene segues into a riveting dance number on “Don’t Stop Till You Get Enough.” Michael’s famed choreographic style is showcased once more during the “Billie Jean” sequence; his silhouette is revealed by the dancers’ LED costumes. For “Black or White,” performers manipulate flags in a tribute to the nations and dance styles of the world, including African, Spanish, Thai, and Georgian dances.

The show’s finale culminates with the song “Man in the Mirror” – a song Michael often chose to end his concerts – in a celebration of the legacy of an immortal.