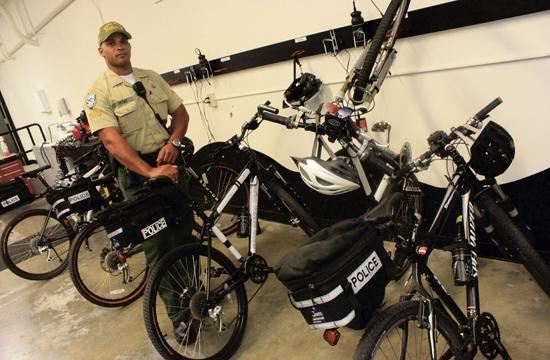 In preparation for the closure of Parking Structure 6 at 1431 Second Street next month for demolition and reconstruction, the Santa Monica Police Department will close its street-level substation today and relocate its 15 personnel to police headquarters a block away on Olympic Boulevard.

Although the substation is closing, the department reassures the public that police service will remain the same with continued patrols in the Downtown area on foot and on bicycles.

SMPD Sgt. Richard Lewis said six officers and a sergeant, as well as seven Downtown Service Officers and their supervisor would relocate as part of the closure.

“They will report here, get their equipment, then respond out to Third Street as they would on Second Street, they just have to go another block further,” Lewis said. “Nothing will change. It will be seamless.”

Anyone who needs to file a report or obtain assistance with a non-emergency issue should call 310.458.8491 or visit the Santa Monica Police Department’s Public Safety Facility located at 333 Olympic Drive, Santa Monica.

Lewis said there was no plan for a new police substation in the new parking Structure 6 when complete, but the department was in talks with Downtown Santa Monica, Inc. to establish a kiosk on the Third Street Promenade.

“They are looking in the 1200 block, maybe the 1300 block, to put the kiosk,” he said. “Obviously officers wouldn’t work out of it like a business, but it’ll be open for answering questions, the officers can store bikes there, and the public can go there and do small reports.”

The department had a kiosk on Third Street Promenade up until eight and a half years ago when the substation in Parking Structure 6 was established.

For emergencies, and to report suspicious activity or a crime in progress, the public should call 911.

Parking Structure 6 is scheduled to reopen late in 2013 with more than 700 spaces, which is more than double its current 342 spaces.