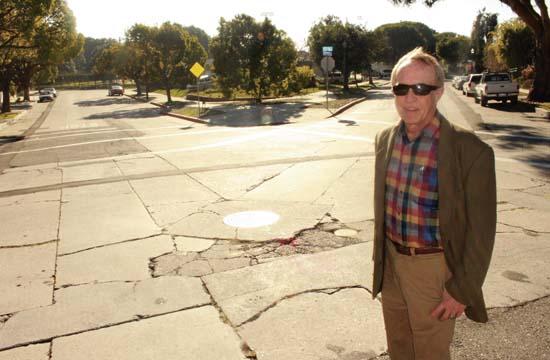 A little flash of sadness came across Santa Monica resident Bob Burket when he heard the intersection of Robson and Marine was being resurfaced, as it means saying goodbye to a little bit of history in the form of concrete road that’s nearly a century old.

Burket runs tri-weekly through this intersection, which is one of the last remaining areas containing a large amount of concrete from resurfacing that took place on the Westside in the early 1920s.

This particular intersection was established under Tract Map No. 9833 in 1927 and there are street plans with this date and several “1927” stamps in the existing concrete.

While Burket agrees it’s time for a new road surface, he said his interest in the resurfacing project stemmed from abiding interest in the former streetcars of Los Angeles, which in Santa Monica were represented by the Pacific Electric Red Cars.

“This has me alert for traces, which in turn led to an awareness of paving itself,” Burket said. “There were four ways of getting to Santa Monica on the Red Cars: San Vicente Boulevard, Santa Monica Boulevard, the route of the upcoming Expo Line (then called the Santa Monica Air Line), and Venice Boulevard and up through Venice and along Main Street. Anyhow, although there’s not much left (the last lines were abandoned 1950-53), the interest remains, and I notice surface structures.”

During the past several decades, he said he had noticed some areas around the city that had old concrete roads.

The roads he has examined include some North-South streets between Barrington and Bundy north of Olympic, Amherst Street in Santa Monica, and Barrington at Gateway about ten years ago.

Several other streets in Santa Monica have concrete pavement, the most notable being Olympic Boulevard.

He said several walks leading from Ocean Avenue to the beach are also concrete as are a few streets with steep slopes such as Wilson Place east of Lincoln Blvd.

“It is likely that a few concrete streets in Santa Monica have either been replaced or paved-over with asphalt in the past,” he said. “The City is planning concrete panel repairs for La Mesa Drive as well as other concrete streets over the next several years if funds are available.”

Burket said the Robson and Marine intersection had previously had troughs dug for underground-piping repair and were filled-in with concrete, with the result that there is “no trough or roughness at the boundaries: no bump to the auto.”

“That old pavement has lasted a whole lot longer than subsequent asphalt projects since the time, and I’ll miss this quite serviceable relic of seventy years ago,” he said.

The Robson and Marine intersection will in fact be replaced with new concrete – not asphalt – with completion scheduled for March 2012, according to Pastucha.

In addition, damaged sidewalks adjacent to the mature parkway trees will be replaced using a modular sidewalk system made from 100 percent post-consumer waste recycled plastic.

The City’s street maintenance crews have pioneered the use of rubber sidewalks to replaced sidewalks damaged by tree root growth for more than 10 years.