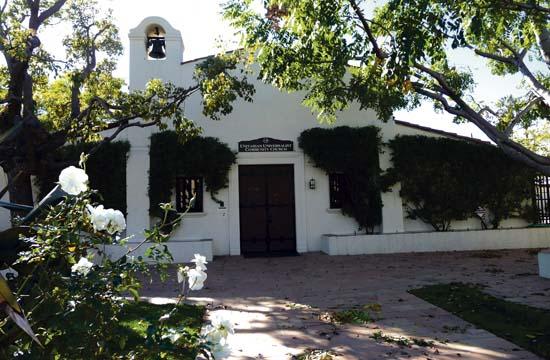 John Winford Byers, Santa Monica’s most important architect and builder in the period between WWI and WWII, told the Los Angeles Times on May 17, 1931, “Buildings of adobe are replete with a delicate and elusive charm and there is an easy plasticity about the material that makes it particularly suitable to the Spanish or California type of architecture.”

Byers was noted for his work with adobe and was a leader in its use as a California building material. Today we would label adobe “green.” It’s local. It provides great insulation – keeping buildings cool during the day and warm at night. And it is an all-natural material.

Byers was a self-taught architect. After receiving a degree in Electrical Engineering from of the University of Michigan he went on to do graduate work at Harvard University. Byers also had experience as a teacher and had worked at the North American Academy in Montevideo, Uruguay before coming to Santa Monica in 1910 to chair the Romance Languages Department at Santa Monica High School. It is thought that during his time in Latin America he became enamored with the architectural vernacular he called, “Latin Houses.”

After his working day at the High School was over, Byers would work as a translator for the Mexican workmen on construction sites and through working with them he learned how to build with adobe. He began his architectural career building residences for his own family and for his cousin. His first commissioned design, in 1916, was a house for W.F. Barnum, the principal at Santa Monica High School.

Byers relied on the building traditions of Hispanic cultures, building in the Mexican Colonial the Spanish Colonial and the Monterey styles. When he couldn’t get the curved, clay roof tiles he needed for these buildings, he established his own workshop and employed the traditional technique where workmen used their thighs as forms to shape the wet clay for the curved tile shape needed for rooftops. The workshop also produced decorative tile, wrought iron and woodwork. He named his company the “John Byers Organization for the Design and Building of Latin Houses.”

By 1926 Byers was a licensed architect. Among his clients were Norma Shearer and Irving Thalberg, Shirley Temple, Joel McCrea, Laurence (Buster) Crabbe, and King Vidor. He went on to design Ray Bradbury’s house, a ranch house at the Getty in Malibu, and the Club House at Brentwood Country Club, where he was a member and an avid golfer.

One of Byers’ important public buildings in Santa Monica is the Miles Playhouse. Designed in 1929, the Playhouse was the vision of J. Euclid Miles who wanted a memorial for his daughter, Mary A. Miles, and Miles bequeathed $25,000 to the City to fund the Playhouse.

Justin Yoffe, the Cultural Affairs Supervisor for the Playhouse, said the annual “Fireside at the Miles” event started three years ago.

“We opened up the main hall so citizens could experience the intimate auditorium the way citizens did when it was first built,” Yoffe said. This January and February, “Fireside at the Miles” will feature six weekends of music and dance at the Playhouse, located in Reed Park. Visit www.milesplayhouse.org for more information.

The Unitarian Universalist Community Church of Santa Monica is another important public building designed by Byers.

“It’s plaster exterior and dark wood ceilings and beams create a sense of early California,” Mechur said. “The Church has kept the sanctuary building intact as the congregation has grown. It was exciting to create a campus for the Church, knitting together the church building, a modernist addition, and the adjacent 1914 bungalow.”

Carol Lemlein, President of the Santa Monica Conservancy, said the organization’s members would meet in the Church this Sunday, Jan. 29.

“We are pleased to be holding our annual meeting in the John Byers designed Unitarian Universalist Community Church of Santa Monica,” Lemlein said. “He is widely recognized as one of, if not the most, influential Santa Monica architects of the first half of the twentieth century.”

Visit www.smconservancy.org for more information about the meeting.

A third Byers’ public building is the office he designed and built, located at 246 26th Street. The building, a Santa Monica landmark, is currently a restaurant. He worked there with Edla Muir, also a self taught architect. She worked for Byers for 11 years before getting her license and then becoming his partner in the firm.

Ken Breisch, an architecture professor at USC, said during the late 1920s and early 1930s, Byers became a major proponent in Southern California for the revival of traditional adobe construction.

“In addition to designing his own houses, he acted as a consultant in this capacity for the development of Rancho Santa Fe and several other major projects in California, Nevada and Arizona,” Breisch said. “Much of Byers’ and Muir’s early work exhibits traits of the Spanish Colonial Revival, while during their later years they also worked in other American Revival styles to produce some of the most beautiful and graceful adaptations of historic revival architecture in Southern California.”

At the time of his death in 1966, he lived at 2034 La Mesa, an elegant Montery Revival design and the third home he built in Santa Monica for his own family. He was 91 years old.

In many ways, we are exploring and rediscovering how to express the respect for the landscape of California, the understanding and use of materials that adapt their buildings to the climate and, hopefully, the grace that was the Byers legacy to the City.