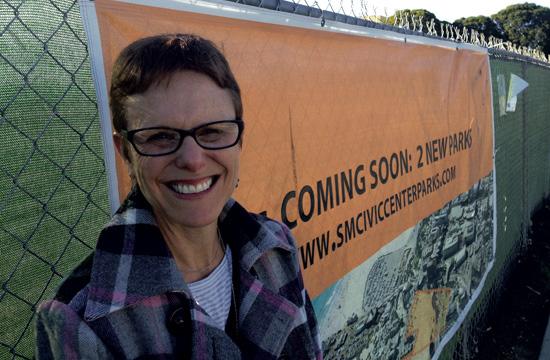 There is yet another changing of the guard at City Hall, as Santa Monica’s Community and Cultural Services (CCS) Department announced the internal promotion of Karen Ginsberg to department Director.

Formerly the department’s Assistant Director, Ginsberg replaces Barbara Stinchfield, who made her final staff presentation at the council’s Dec. 16 meeting.

“Karen has a proven track record in overseeing community services and in realizing improvements to the city’s parks, open spaces and public facilities,” Gould said. “Her clear, strategic thinking has served the department well in budget matters, team management and creative problem-solving. Under Karen’s steady hand, the strength and competence of the current CCS management team will ensure a continued excellence in service to the community.”

According to City Hall, Ginsberg has been an integral member of the CCS team and has participated in the development of the department’s various initiatives and services, including recreation activities, classes and culture, human services, landscape maintenance, and open space.

The key projects she has overseen include the expansion of one park (Virginia Avenue Park) and the development of Santa Monica’s first new parks in 24 years (Euclid and Airport parks).

She was also instrumental in developing the regulatory review process for Annenberg Community Beach House, as well as guiding staff and the city council to approving the Palisades Garden Walk and Town Square. Local residents were offered greater access to Samohi during non-school hours thanks to $56 million in recreational improvements, the funding of which was facilitated by Ginsberg.

Other responsibilities included, in part, managing the department’s budget and capital improvement program.

Ginsberg, who earned her Masters of Science degree in Historic Preservation from Columbia University, joined City Hall in 1994 as a member of the Santa Monica Planning Department. Prior to that, she was a planner with the Los Angeles City Community Redevelopment Agency.

According to City Hall, Ginsberg’s responsibilities as CCS Director will include the overseeing of a $47 million operating budget and about 400 employees. Looking ahead, Ginsburg will also be involved with the construction of Palisades Garden Walk and Town Square near City Hall, in addition to other capital improvement projects.

The department as a whole is responsible, according to City Hall, for “the administration, planning, management and operations of the city’s open space, recreational facilities, culture and arts programs, human services, funding for nonprofit grant programs, and public landscape.”

Stinchfield formally announced her retirement Oct. 29 and stepped away from City Hall Dec. 29.