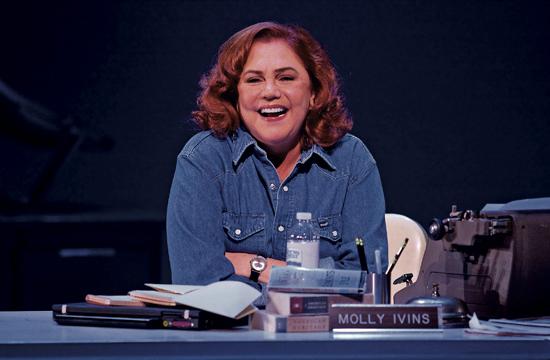 The moment Kathleen Turner speaks her first word of dialogue, you somehow know you should fasten your seat belts for the extraordinary theatrical ride that is going to ensue, and ensue it does, as Turner brings to life Molly Ivins, one of America’s most respected, multiple award-winning columnists. Through her political commentaries, Ivins poked holes in what she saw as the absurdity and corruption in politics – especially in her home state of Texas. Her syndicated column in the Fort Worth Star-Telegram ran in more than 400 newspapers.

Written in exquisite detail by Margaret Engel and Allison Engel and splendidly directed by David Esbjornson, who keeps the action moving at a clipped pace, the setting for this virtually one-woman show is the interior of a pressroom, designed by John Arnone, with vacant desks piled on top of each other signifying that this office is closing down. In short order we begin to learn that today is her last day at her desk. She is struggling to write her final feature on an old fashion manual typewriter, pausing sporadically to take us through an autobiographical, visual tour of her life.

Through the effective use of historic rear screen projections by Maya Ciarrocchi, we begin to learn about the life and times of Molly Ivins. Although she was born in Monterey, California, she was raised in Austin, Texas where her father was an oil and gas executive who was very authoritarian which, for someone with Molly’s disposition, was probably not the most compatible trait. With impeccable comic timing and the most mesmerizing vocal delivery, Turner gracefully glides around the stage and, breaking the fourth wall, shares Molly’s story in intimate detail. She talks about her various jobs at different newspapers including the Minneapolis Tribune where she covered, “Militant blacks, angry Indians, radical students, uppity women, and a motley assortment of other misfits and troublemakers.” Turner explains in great detail her stint as co-editor of the Texas Observer where she covered the Texas Legislature and became friends with Secretary of State Bob Bullock, future governor Ann Richards, and folklorist John Henry Faulk, who in regard to giving up liberties, she quotes him as saying, “When you make yourself less free, you are not safer, you are just less free.”

The state of Texas politics was a veritable gold mine for her satirical mind which allowed her to come up with such quotes as: “When you’re anti-war in this country, advertisers are scarce,” or “I love Texas. It is a harmless diversion,” or “Can you believe God gave me all this material for free.” Other notable quips included “No gay will come out of the closet in Midland, for fear they’d think he was a Democrat,” or referring to the Bushes “Next time I tell you someone from Texas should not be President of the United States, please pay attention.” Ivins ruffled more than one feather with, “In Texas, we do not hold high expectations for the governor’s office; it’s mostly been occupied by crooks, dorks and the comatose,” or “As they say around the Texas legislature, if you can’t drink their whiskey, screw their women, take their money, and vote against ‘em anyway, you don’t belong in the office.” One of the funniest references to the legislature was: “Six of the seven Speakers of the House were indicted; the seventh was shot dead by his wife.”

Turner shares with the audience Ivins’ writing style sometimes didn’t meet an editor’s expectation and cited a feature she wrote on a community chicken-killing festival in New Mexico using the headline, “Gang-Pluck.” The then-editor of the New York Times, Abe Rosenthal, admonished her and accused her of trying to put dirty thoughts in his readers’ heads, to which she replied: “Damn if I could fool you, Mr. Rosenthal.”

An 80-minute one-person show could be problematic if it doesn’t provide emotional transitions or a change of pace and in this regard, Turner, guided by the skilled director, is a master as she transitions from light and comic to the sadness of losing the only man she ever loved, Henry “Hank” Holland, Jr., who was killed in a motorcycle accident, or her wrenching experience on seeing the Vietnam War Memorial which she describes as, “It was like walking into the war.” She reveals her personal battle with breast cancer, (which ultimately killed her) as well as her struggle with alcoholism.

With her down-home southern accent, Turner embodies Molly Ivins and delivers perfectly such lines as “It’s as obvious to me as balls on a tall dog,” or “The only trouble with Texas Baptists is we don’t hold them under water long enough.” My personal favorite is “I wanted a dog named ‘Shit,’ so I could go in the backyard anytime I wanted and scream Shit, Shit, Shit.”

As the play comes to an end, the no-dialogue, unnecessary helper character, played by Matthew Van Oss, who only appears on stage to deliver bulletins coming in on the AP wire, symbolically pushes her desk to the back wall and removes her chair. We know this is her last day and her last story and she says she wants her epitaph to read: “She never made a shrewd career move.” For Miss Turner, this tour-de-force is, indeed, an incredibly shrewd career move, and a marvelous choice of material.