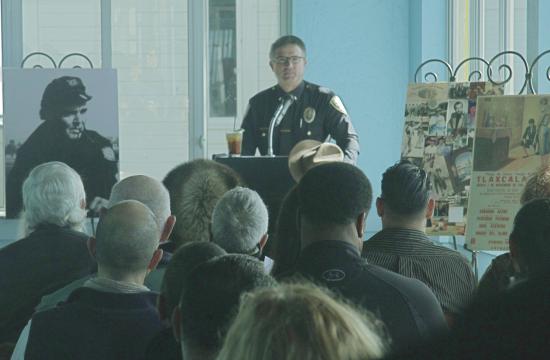 A memorial service for Patrick Cunningham was held on Saturday, Jan. 21, at the Santa Monica Pier. The Retired Harbor Patrolman passed away of natural causes on Jan. 3, 2012. He was 85 years old.

Cunningham was a Harbor Patrol Officer for 27 years and he retired in 2002. “Harbor 3” worked the night shifts and was affectionately known at the pier as the “Night Captain”.

Services on Saturday included a wreath laying ceremony in the ocean at the end of the pier.

The colorful figure gained acclaim fighting bulls in Spain in the late 50s. His mentor at that time in Seville, was American bullfighter, Sydney Franklin.

Cunningham was raised in Philadelphia. He attended St. Paul’s Academy and Valley Forge.

After a brief stint in the army, he played football briefly for USC where he was a member of the Sigma Chi fraternity.

Still in his 20s, he explored the upper reaches of the Amazon in Brazil. After his return from Spain he opened a popular bar-restaurant in Santa Monica Canyon called “The Shady Side.”

An excellent swimmer, Cunningham was a lifeguard in his youth on Catalina Island.

In the latter part of his varied and adventurous life he worked nights as a Harbor Patrol officer on the Santa Monica pier, using the late hours of the morning to write two published novels, “A River of Lions” and “The Dusa Affair.”