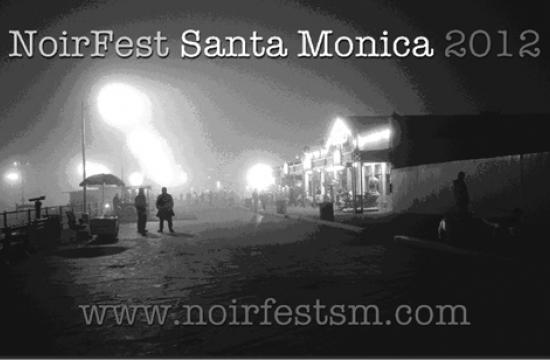 Santa Monica welcomes a new festival this year – NoirFest Santa Monica 2012, which starts this Saturday, Jan. 14 and continues through March 28.

Very much like the Pacific Standard Time initiative offered by the Getty Foundation, NoirFest Santa Monica is also a collection of events with a unifying theme that continues for several months.

However, NoirFest Santa Monica is a grass roots, community-based festival created to celebrate noir throughout the city.

The festival will include art, film, photography, literature, music, and spoken word at various historic venues.

Reminiscent of the cinematic ventures of the 1940s and 1950s, NoirFest Santa Monica proposes to capture noir moments in time.

Santa Monica’s ever present mist has inspired filmmakers and novelists to use the city as a setting in many detective stories.

Like a rare black and white image plucked from a film noir or Raymond Chandler novel, NoirFest Santa Monica hopes to rekindle this simple yet striking part of Santa Monica history.

In Gallery II, a classic tribute to noir photography by legends such as famed Parisian photographer Brassai and several of his contemporaries will also be on display.

Taking her inspiration from Brassai’s book “Paris at Night,” film noir of the 40s and 50s, and German Expressionism, Garber’s work is evocative of the minimal black and white cinematic style.

Garber said she was excited about her upcoming show.

“I wanted to work with texture and brushes and use inexpensive, no longer needed materials to create new original, unique objects of art,” Garber said.

With more than four years working on developing this technique, Garber sold a number of pieces, including one to the Irish Museum of Modern Art in Dublin.

The piece has won several awards and was included in the International Photography Association’s 2011 Best of Show exhibition in New York.

“dnj Gallery accepted a number of pieces right away and I have just finished the fortieth piece for the show,” she said. “Too much for one room, I will trust curator Pamela Schoenberg to choose the best to display in her gallery.”

The opening night reception for “Encaustic Noir” at dnj Gallery (J-1) will take place from 7 p.m. to 9 p.m. with a no-host party immediately following at the Upper West Restaurant, which is the official Bar Noir for the festival located at 3321 Pico Blvd. (across from Trader Joe’s).

Upper West Restaurant will feature specially-priced drinks and appetizers as well as introducing an event cocktail, the Bar Noir Manhattan.

Film Noir masterpieces will be projected with period music playing at the same time. Vintage attire is recommended.

Admission is free to both venues with no reservation needed, except for dinner. Call for a reservation at 310.586.1111. For a full list of participating venues and an event schedule, visit www.noirfestsm.com. For more information about the opening night reception, email office@dnjgallery.net.