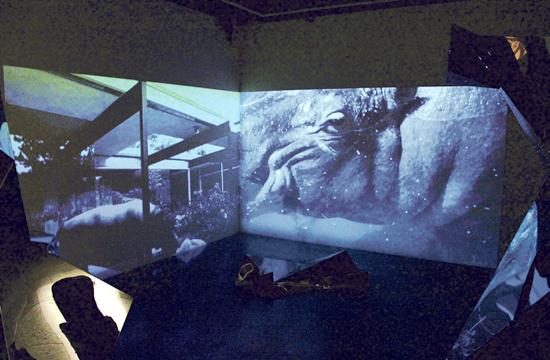 The Santa Monica Museum of Art has paired two top innovative artists, Adam Berg of Los Angeles and Georgi Tushev of New York, bringing together two artistic innovators from the East and West coasts who are both working to further the field of contemporary art.

On Friday, more than 400 people were entertained by the pieces at the opening of the exhibitions. All attendees were able to socialize and mingle with not only the featured artists, but also with other renowned artists such as painter Ed Moses and conceptual artist Daniel Martinez.

For the exhibition at SMMoA, Adam Berg submitted Endangered Spaces, a visual sculpture and multimedia piece specifically created for the space. Georgi Tushev submitted paintings from his Strange Attractor series.

Both artists united under the banner of using modern science in order to create their own unique visions, and both successfully upped the perceived limits of materials—Tushev paint and Berg film—quite possibly sending the 20th century movements in a new direction.

Tushev, originally from Bulgaria, uses magnetism to shape his art inside his Strange Attractor series of work. His pieces are a showcase of a handful of his most recent experiments with high-powered magnets juxtaposing oil and small shavings of ferromagnetic metal against a black color field.

The effect is sublime.

“They almost look like they are celestial or lunar,” said Jeffrey Uslip, the visiting New York-based curator who selected Georgi Tushev for the Santa Monica Museum of Art show. “You can almost see the magnetic fields being physically recorded in the picture (that represents) a new possibility for what paint can do specifically with abstraction.”

Uslip believes he has found an innovative spirituality inside the compositions of Tushev’s Strange Attractor series, and that Tushev has a “signature visual vocabulary” as an artist who is “furthering the discourse of abstraction,” with his experiments and investigation techniques on the effects oil paint has on a canvas when exposed to magnetic fields.

Tushev’s techniques could be groundbreaking and lead to more innovative thought on how one can use science to further the entire field of art in general.

In order to achieve the desired “lunar” effect, Tushev frequently uses 2 lb. neodymium magnets in order to create the north and south ends of his blackened sea urchin type structures that can be found nestled and poking out of the black “volcanic” topography.

“I’ve been using magnets to control paint the same way you can use a brush to manipulate paints,” said Tushev who has been “playing” with permanent and electric magnets in order to utilize space and express his imagined objects inside of it.

“Georgi’s work has this type of volcanic surface and topography,” said Lisa Melandri Deputy Director for Exhibitions and Programs. “The idea was to bring a series to the Museum that would look at art being made on both coasts. Knowing that both LA and New York are such incredible cultural centers, there was this chance to see what was percolating at the moment.”

In the same sense as Tushev, Berg also took a scientific view of art combining it with architecture and multimedia inside his Endangered Spaces.

“The sculpture pieces are intertwined with the wall pieces and they are like origami folds that show different facets of reality but in a fragmented way and in a way that resonates with human perception,” said Berg. “There is a great mystery with the collage of humans and nature because mostly when they are there they don’t do anything, they just get photographed.”

All of the locations inside his film can be found along the California Coastline with a strong focus on the beautiful Beyer House that was also used as the interior for the home of fictional billionaire Tony Stark, played by Robert Downey Jr., during the filming of Iron Man.

Berg capitalizes on the circular themes of the spiral that create the architectural illusion of movement with his inclusion of the Beyer House and utilizes them in his multimedia piece focusing attention on endangered animals wandering throughout the isolated concrete world of Endangered Spaces.

“It’s not just endangered animals but there is also an endangerment of modernist architecture within Los Angeles,” said Berg. “It is a two-fold state of being conscious of preserving and sustaining what we have both in terms of the wildlife and the architecture.”

Interlocking triangle structures made of mirrors are offered by Berg as sculpture pieces in order to help his viewers understand the intrinsic connection between architecture and nature found inside his multimedia piece.

“The triangle is a measuring device, a kind of cartographical device and the sculpture pieces are merely a sense of manifold that is absolutely perfect as opposed to the nature which is fragmented,” said Berg. “I look at the notion of utopian space for the early part of the last century. It is a heightened state of mind in terms of how we fit into the world and how we have regressed since then.”

Along with the surrealistic animal and ocean noises accompanying the ominous music such as one would expect from a Salvador Dali exhibit, a sense of isolation and detachment is created for the viewer that gives ample opportunity for reflection on the symbiotic relationship between nature and science.

“The way we perceive nature is by demarking us outside nature,” said Berg. “That’s how the photo constructions are related to the tradition of marking the human figure in nature. When we look at architecture and other spaces, we tend to purify them out of the living.”

Also featured at Bergamot Station at the Santa Monica Museum of Art is Beatrice Wood, whose art is on display through February 25. The exhibition, Beatrice Wood: Career Woman—Drawings, Paintings, Vessels, and Objects, specializes not only in her drawings and paintings, but also strongly focuses on her passion in the creation of clay vessels and objects.

Berg’s and Tushev’s art pieces will be on display along with Wood in the Bergamot Station at the Santa Monica Museum of Art Tuesdays through Saturdays from 11 a.m. to 6 p.m. until Feb. 25.