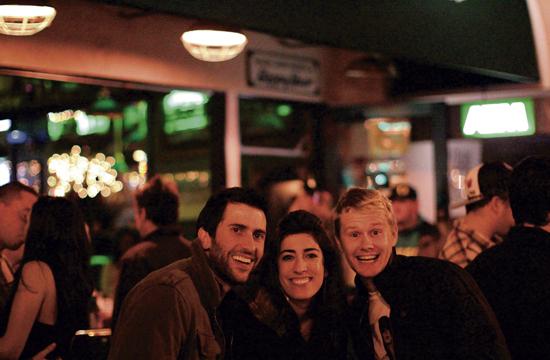 With so many New Year’s Eve happenings at local bars and restaurants, The Mirror decided to embark on a pub crawl of its own to experience all that Santa Monica has to offer when it comes to food, drinks, and live music.

Pub crawls have been increasing in popularity in Santa Monica, which was seen last month with more than 4,500 people taking part in the 3rd Annual Pub Crawl.

New Year’s Eve provided opportunity for many groups of pub crawlers to move from bar-to-bar along Main Street, the Third Street Promenade, and Downtown Santa Monica.

“I like the trendy pop music here at Yankee Doodles,” said pub crawler Brittany Bramlett, who also said she was impressed by the service at this Third Street Promenade venue. “I also liked the fact that I ran into my friends for New Year’s (at Yankee Doodles), it was so random.”

According to Citysearch Users, Yankee Doodles bar and restaurant is the “number one sports bar in Santa Monica” as well as being one of the most spacious bars in the city.

Another bar enjoyed early into the crawl was Renee’s Courtyard Café, which impressed first time visitors with its décor and atmosphere.

In the courtyard, its trees were wrapped with multicolored lights. Inside, its two full service bars and a side room resembled a study.

“The décor is fantastic,” said Hatcher who came to the Santa Monica for New Year’s Eve from Thousand Oaks. “I felt like I was back in a bar in London.”

When visiting pubs during a pub crawl, it’s always good to keep a full stomach while drinking so many brews.

Barney’s Beanery, located on the Third Street Promenade near Yankee Doodles, has a menu with just about everything you could want when it comes to American food.

Inside, New Year’s Eve revelers could be seen eating their favorite foods while choosing from the large selection of beers in the casual yet exciting sports setting.

“I loved the pulled pork,” said Marshall Travis. “It was succulent and tasty.”

Harper said he enjoyed the Cream Stout, but was even more impressed by the Irish Car Bombs served at O’Brien’s on Main Street, which had a live band.

A block down on Main Street, Rick’s Tavern General Manager Bob Linster said he had a different approach attracting patrons – using his charming personality and doing his best at every moment to impress inside the cozy atmosphere.

Linster fed off the positive vibes inside his bar, greeting each patron with a warm smile while offering specialty beers and drinks during the merry evening.

For some pub crawl participants, the decision between liking a place or not comes down to the initial encounter with the doorman who at many times doubles as a “bouncer.”

The bouncer outside Brittania named “Voka” made sure the night stayed in order while checking IDs outside the English styled pub located a few steps away from the Third Street Promenade on Santa Monica Blvd.

Pub crawler Mandie Abuzalaf said she had a pleasant experience with the bouncer at West 4th/Jane.

“He opened the door for me and even told me I was pretty,” Abuzalaf said.

This welcoming greeting provided a relaxing atmosphere for Abuzalaf and her husband Shaun when the New Year’s bell rang at midnight at West 4th/Jane bar.

Champagne glasses were held high and most eyes turned to the countdown clock on the large screen during the final moments of 2011.

Throughout the foggy night, many of the city’s taxi drivers ferried patrons around to different parts of the city providing transportation to not only customers and pub crawlers, but also to tourists participating in the city wide celebration to usher in New Year’s 2012.