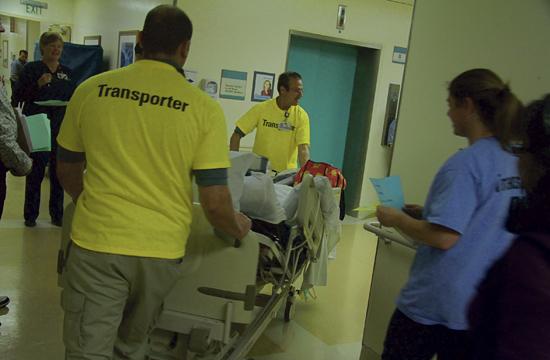 There was a hive of activity at the new UCLA Medical Center, Santa Monica on Sunday as it officially opened its doors. As part of the opening, about 125 adult and pediatric patients were carefully transported into new hospital buildings on the Santa Monica campus, as well as the existing Merle Norman Pavilion.

Teams of doctors, nurses, and moving specialists transported patients to ensure they were safely and efficiently relocated to the new hospital. The move followed months of extensive planning to prepare the hospital for licensing and occupancy, and to orchestrate the extremely detailed sequence of patient relocations.

Part of a system-wide rebuilding project, the new Santa Monica campus features the UCLA Medical Center, Santa Monica; a branch of Mattel Children’s Hospital UCLA; the Los Angeles Orthopaedic Hospital; and the UCLA Rape Treatment Center. The new main entrance to the campus has returned to its former location at 1250 16th St.

“Every patient who comes to us deserves the best, and every one of them, when they leave us, should be an ambassador to tell others about the great care and service they received at UCLA,” said Dr. David Feinberg, president of UCLA Health System. “This wonderful new facility not only accommodates scientific and technical excellence, but also creates an environment that is healing.”

Dr. James Atkinson, who oversaw the rebuilding project and serves as medical director at the campus, said the move marked the final stage in the transformation of the hospital from a private community hospital to an academic-community hospital that “delivers world-class UCLA care to every patient.”

He added that the Santa Monica campus will provide the full continuum of services, from neonatal intensive care to geriatric medicine, and serve as the inpatient home of UCLA’s highly regarded orthopaedic, geriatric, and general medicine programs.

Key components of the new campus include:

• The Orthopaedic Hospital Institute, featuring an outpatient clinic for adult and pediatric orthopaedics, the UCLA Department of Orthopaedics administrative and faculty offices, a library, and museum-style display cases.

• 266 inpatient beds, most in private, spacious rooms that feature family space and sleeper chairs for rooming-in.

• A 22-bed adult and pediatric intensive care unit with the latest technology and 360-degree access to patients.

• A conference center with meeting rooms and a 90-seat auditorium.

• A new cafeteria with indoor and outdoor seating.

Several key services opened during a previous phase, including the Nethercutt Emergency Center in 2007, which now serves almost 40,000 patients annually, and the BirthPlace in 2008, with its comfortable, hotel-like labor, delivery and recovery rooms and 16-bassinet neonatal intensive care unit.

The design of the hospital is inspired not only by the Northern Italianate architecture of original buildings on the UCLA campus, but also by hospitality concepts that speak to the character of the building, its public spaces and patient rooms. More than 25 percent of the new campus is dedicated to green and open spaces.

Now that patients have been moved into the new facilities, the hospital’s existing, nine-story Tower building will be demolished to make way for additional landscaped gardens. A majority of the concrete and steel from the Tower will be recaptured, ground, and recycled into new concrete and steel for future projects. Final site improvements should take about one year to complete.

Funding for the $572 million project was provided by multiple sources including FEMA grants, bond initiatives, and donations from individuals and corporations.