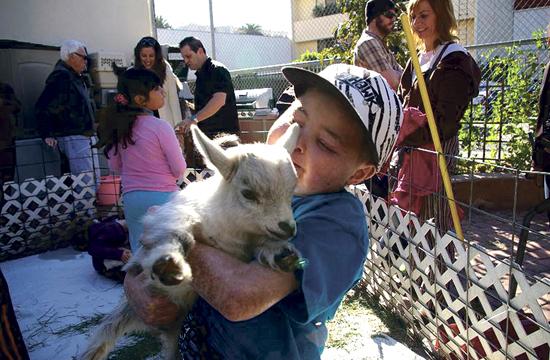 Some furry friends paid a visit to members at the Boys & Girls Clubs of Santa Monica on Dec. 28 when Jessie’s Party Animals and Nettie’s Party Pals brought a petting zoo to the SMBGC Main Branch.

Delighted club children enjoyed some holiday fun playing with cute animals such as a Llama, a mini horse, mini goats, a mini pig, a mini sheep, bunnies, and ducks.

For a few hours, the children had the opportunity to get close to all the animals that are not only used for celebrity events, but also played an important role in the recovery of four-year-old Tristen Doe, who suffered from terminal cancer. Tristen and his mother participated at the event.

Helix Films, a production company based in Santa Monica, joined up with Jessie and Nettie Danielson to provide the fun and nurturing environment to children with serious illnesses and returning war veterans that magically respond to the warmth of the unconditional love provided by the animals, as part of an upcoming TV series.