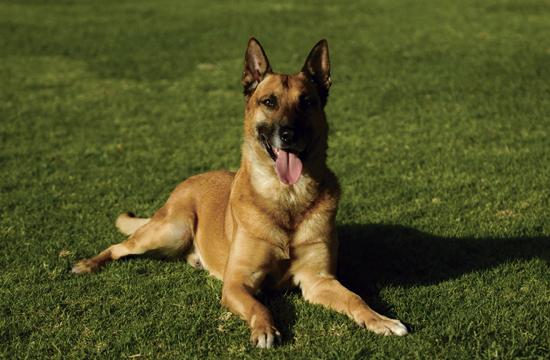 On the big screen, apparently all dogs go to heaven. In Santa Monica, one dog is going home with a police sergeant. After nearly eight years of service with the Santa Monica Police Department (SMPD), police service dog Anton was retired from the force and sold last week to his handler, Sgt. Douglas Kohno, for $1.

The sale was formally approved by the City Council on Jan. 10.

Though swiftly approved without discussion as part of the council’s consent calendar, Mayor Richard Bloom light-heartedly asked Kohno, who was present near the back wall opposite the dais, if he had brought his modest payment to complete the transaction; Kohno affirmed amidst light laughter.

According to the staff report issued to council members, police service dog Anton “has been involved in numerous felony arrests and apprehensions and has received commendations for his capabilities.” Other law enforcement agencies beyond SMPD have also recognized and commended Anton for services he provided to them.

As is customary practice at SMPD, police service dogs are retired from the Canine Program once the aging process has reached a certain point.

Anton is about 11 years old and it was determined he was no longer able-bodied enough to continue service in the Canine Program.

“It would be inhumane to expect canine Anton to continue working as an active service dog due to the problems he is experiencing, which are directly related to the aging process,” the staff report stated. “It has been department policy, since the inception of the Canine Program, to transfer ownership of the canines that have reached the end of their active service life, to their handlers for a nominal sum.”

Keeping consistent with the department’s practice, the SMPD sought to have Anton retired from service and have Kohno serve as his regular caretaker and provider.

City Hall pointed out the practice of retiring police service dogs to his or her handlers after reaching a certain age or due to developed medical conditions is a common practice of several law enforcement agencies.

“The policy is in the best interest of the animal and removes the possibility of any potential liability to the City,” the staff report concluded.

Hopefully, Anton will have a slice of heaven while spending the rest of his twilight years with Kohno.