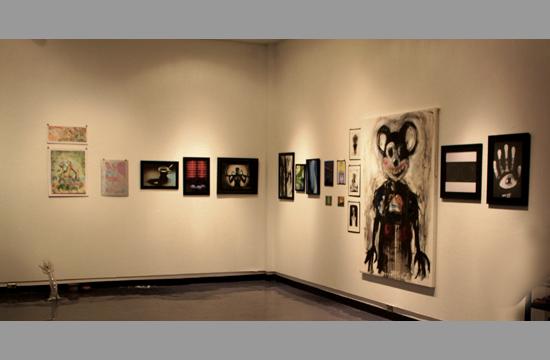 It is easy to assume that when a teenager graduates high school and leaves home to attend college in another state that they will return home sparingly, oftentimes just to visit family.

When Caer Ferguson graduated from Samohi almost three years ago and moved to the School of the Museum of Fine Arts (SMFA) at Tufts University in Boston, Mass., she knew she would return to Santa Monica. Unlike most college students in her position, though, she is both visiting family and making a significant difference in the local arts community.

Interestingly enough, Ferguson’s contributions to local arts were very much inspired by working with her father during her days at Samohi.

On Thursday, the Homegrown Art Show and Sale returned to Samohi for the second time. The event was introduced by Ferguson last year, her second year at the SMFA. It was during her early days there at Tufts when she realized the need to bring a local art show and sale back to home to Santa Monica.

Of course, the original spark was lit when she worked on a similar project with her father, Scott.

“The original homegrown sale was a sister-project to the homegrown orchestral salon series that my father, Scott Ferguson, ran for the last couple years,” Ferguson said. “I had never tried to plan an event of this scale while at I was at Samo. It is honestly too large of a project to do while you are also high school student.”

Taking on this project as a college student, however, seemed so much more feasible, especially considering how she witnessed firsthand how such an art show and sale could be organized while attending the SMFA.

“One of my other inspirations was the art sale my school, The School of the Museum of Fine Arts, puts on each year to raise money for student scholarships,” she said. “Their model was to sell the pieces of students, teachers, alumni, and affiliated artists with half of the proceeds going towards the school’s financial aid but their sale is many, many times larger than the homegrown sale.”

With inspiration in tow, Ferguson started to ponder how she could bring a similar art show and sale concept to Santa Monica, both to raise awareness of and funding for the arts.

“The arts has always been a program that really has to fight to get any funding. Beyond funding, I think the greatest part of this show is the experience it gives the students,” Ferguson said. “I remember selling my first piece at the Museum School’s art sale and it was a validating moment. That something that I put hours of thought and effort into was worth a quantifiable amount to someone else I didn’t even know.”

In interacting with local high school students who share her passion for the arts, Ferguson often gave valuable advice on how to make a viable living as an artist.

“During the time I have been working with the Samohi students, I have talked to them about how to price and hang work and have tried to run the event like a professional gallery would. This would hopefully start forming strong skills if any of them were to pursue a career as a professional artist,” she said.

Accordingly, Ferguson does hope the Homegrown Arts Show and Sale will become a valuable platform for local artists to congregate to not only showcase their respective works, but also to earn some money for their creative labors, as well.

She also believes the Samohi event may be a better alternative for artists than the hundreds of art galleries smattered across Southern California.

“Homegrown can be a venue for artists who may or may not have many gallery connections, to still be able to sell their work. Hopefully the event will also open doors for many of these artists,” she said. “The show is open to any member of the Samohi community, and I have noticed a significant raise in submissions from alumni than last year. For alumni who are up-and- coming artists, it can be difficult to find places to sell your work. As far as I can tell, the gallery world can be very tricky.”

Looking forward, she hopes the Homegrown Art Show and Sale will eventually outgrow Samohi’s Roberts Arts Gallery, where this year’s event was held.

“I hope I can continue to come back and assist the art department for that long, but as a young artist myself, it is hard to predict where I will be in a couple years,” she humbly stated. “If life allows me that luxury of coming back, I hope it grows in size and quality. I could see it growing to be held in more than just the school’s Roberts Art Gallery. Also, as more alumni participate in the show, I assume the quality of work would also rise.”

As the Homegrown Art Show and Sale aims to become more prominent, “Homegrown” will feature the works of many Samohi students, including those enrolled in this year’s advanced placement art class instructed by Amy Bouse.

“It would be great if the show was able to showcase work from the entire department … Or who knows, the whole district. I am the type to dream big,” Ferguson said.

“While Santa Monica certainly is very accepting of the arts, I do wish that the city would become even more involved and supportive of the arts,” she said.

In the meantime, Ferguson is happy to work with many young artists through the Homegrown Art Show and Sale.

“I think that this show will really showcase the talent that is all around us and remind us all of how much art is worth,” she said.

The Homegrown Art Show and Sale also featured free refreshments and live musical performances. As part of the event, 50 percent of the money raised was directed toward the school’s art department to cover expenses, while the artists received the other 50 percent.

For more information of the event, please contact the Samohi Art Dept. through the school’s main telephone line at 310.395.3204.