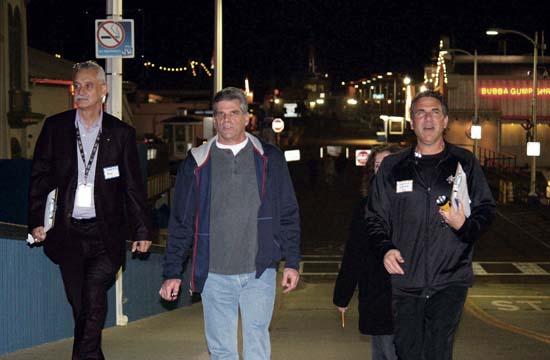 More than 250 volunteers pounded the pavement as part of the annual Santa Monica Homeless Count 2012 in the early hours of Thursday to collect data and identify the entire homeless population throughout the city.

The homeless count not only focuses on people who live on the streets, but it also takes into account those who frequent the many hospitals and shelters available in the city, as well as those who do not have a permanent residence.

“There’s always a challenge to identify individuals,” said Ray Brewer, Field Office Director for the U.S. Department of Housing and Development in Los Angeles. “We truly believe that everyone deserves a home. That includes homeless families, the homeless veteran population, as well as chronic homelessness.”

Brewer showed his support for the City of Santa Monica’s efforts to document the demographic changes in the homeless population by walking with other volunteers who participated in the annual homeless count.

“From the federal side, not only are we providing funding resources, but we also want to support the efforts made by the city,” Brewer said.

Brewer said he was impressed that the City of Santa Monica placed such a strong emphasis to understanding and resolving the problem annually even though mandate only requires this count to be done once every two years.

“We are working to solve homelessness,” Brewer said. “Our goal is to identify homeless people and then to get them housing and move them to the supportive services they need.”

First-time volunteer Warren Mullisen said he participated because he wanted to be part of a greater cause.

“I want to make people aware of the people that are homeless and invisible to most of us,” Mullisen said.

Mullisen said he hoped his volunteering efforts would stir people in the community to give to the various charities that offer services to the men, women, and children who are homeless.

In the City of Santa Monica, the overall homeless population has declined 18.9 percent from 915 individuals counted in 2009 to 740 individuals in 2011.

Strategies adopted by Mayor Richard Bloom and other city leaders seem to be decreasing the numbers of the homeless even further.

Prior to the start of the Homeless Count at 12 a.m. Thursday, Bloom was part of a brief training session for the more than 250 participating community members.

Since 12 percent of the nation’s homeless currently resides in Los Angeles County, and 27 percent live in California, the City of Santa Monica is rightly concerned about the homeless population and how it may affect the rest of the society.

“Our project homecoming program pays for travel assistance to reconnect them with permanent housing sources,” said Administrative Analyst and event organizer Natasha Guest who outlined solutions to the problem.

Guest said the City of Santa Monica offers to reunite homeless individuals with family and friends in their community of origin and will even pay for transportation services to ensure this can happen.

SMPD Officer Robert Hernandez, who was among a large number of police officers in the event, said he counted seven homeless people along the Third Street Promenade during the count.

“I’ve had the same area for five years and there has been a significant decrease in the homeless count in the areas that we have been in,” Faber said. “I’m encouraged by what I’ve seen tonight.”

The system set up by Santa Monica seems to be working and the numbers of homeless along the Third Street Promenade route in downtown Santa Monica looks to have decreased from previous years’ statistics of homelessness in the area, according to Brewer.

“A count is important because from a count you get a data set (from which) you can certainly move forward, track progress, and identify whether or not you are making a difference,” Brewer said. “Santa Monica is one of those cities that, unlike some other larger cities, does their homeless count annually. That shows that this is an area they pay particular attention to. From the federal side we are working together throughout 19 different agencies to resolve homelessness. It’s not just one agency or one group or one non-profit. It’s working together to make a difference.”

The data from this year’s count will be released on Feb. 27.