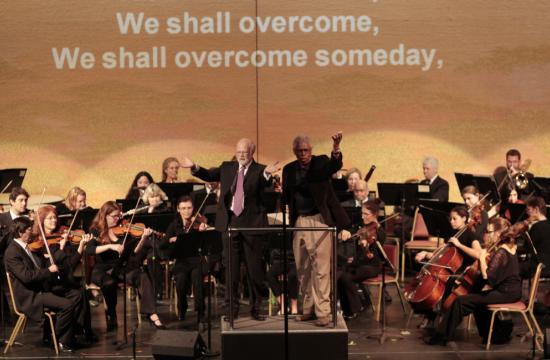 The Soka Gakkai Auditorium quickly filled to capacity with an enthusiastic audience that included representatives from the James Irvine Foundation, MLK Westside Coalition, and Symphony Board of Directors.

The afternoon began with performances by the Cabeza de Vaca Cultura of Santa Monica, who presented dances from the Aztec and folklórico traditions in the auditorium lobby and on the main stage.

KUSC’s Rich Capparela then assumed hosting duties for the afternoon, giving an overview of the concert program and thanking the Symphony’s supporters.

The pre-concert introduction concluded with the MLK Westside Coaltion’s Gary Averech presenting a check for $2,500 to Maestro Allen Robert Gross, who accepted the generous contribution on behalf of the Symphony.

The concert opened with Antonin Dvorak’s Three Slavonic Dances, followed by the highly-anticipated premiere of Paisajes: Concerto for Flamenco Guitar and Orchestra by Adam del Monte.

Del Monte shared thoughts on his compositional process before launching into the three-movement concerto, which depicts three significant landscapes in del his travels and experiences thus far (Spain, Argentina, and Egypt’s Sinai Peninsula).

The second half featured Duo Ye by eminent Chinese composer Chen Yi and Georges Bizet’s Carmen Suite No. 2—a fittingly energetic conclusion to the program.

Maestro Gross and the MLK Westside Coalition’s Nat Trives then led the crowd in the traditional singing of “We Shall Overcome” to honor the work of Dr. King.

The Symphony said it would like to thank its many supporters for their efforts toward this concert’s success, particularly the MLK Westside Coalition for its continued support; the Soka Gakkai International for the use of its auditorium; the James Irvine Foundation, the Herb Alpert Foundation, the City of Santa Monica, the Robert Gore Rifkind Foundation, the Los Angeles County Arts Commission, Supervisor Zev Yaroslavsky, Nat Trives, Rich Capparela, and the Cabeza de Vaca Cultura of Santa Monica.

The Symphony will present its next concert, featuring pianist Gloria Cheng, on Saturday, March 10 at 7:30 p.m. at the Santa Monica Civic Auditorium. Admission is free.

For more information on the Santa Monica Symphony, visit www.smsymphony.org.