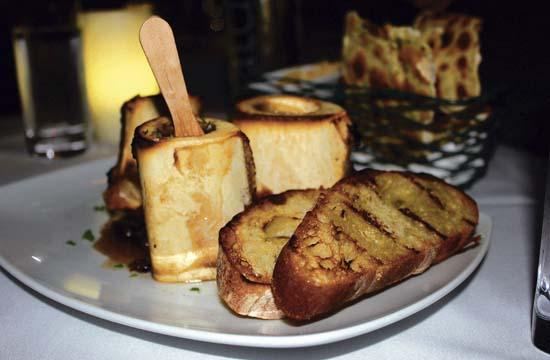 Located in the heart of bustling Main Street, AREAL Restaurant is headed by executive chef Alan Kwan who has created a menu that caters to all types of diners with items that vegetarians and vegans can enjoy while not leaving out the meat eaters as well.

Formerly occupied by World Café for 25 years up until last year, the restaurant has a large patio that’s among the best in the city, as well as a remodeled dining room, lounge, and bar.

The restaurant opened its doors in October to diners who prefer something a little more high-end, but without the cost that is usually associated with an experience of a restaurant with such caliber.

Kwan hails from the Scarpetta group and decided to have a little bit of fun with the menu, but at the same time created unique food that’s also health conscious.

“I’ve been able to work with some really great people over the years and I love to travel,” Kwan said. “I learned different flavor profiles and techniques at the restaurants I’ve been at. I wanted to have a menu that was unique, but approachable.”

One such example is the Bone Marrow dish that’s served with grilled bread. Kwan said he wanted to pay homage to one of his favorite NYC restaurants, Blue Ribbon, which serves an oxtail marmalade that he really loves. AREAL’s version is lighter in flavor as it doesn’t use any sugar or honey. The oxtail is braised with ruby port, red wine, carrots, onions, celery, herbs, and chicken stock. The oxtail is picked off the bone after cooking, chopped and cooked again with edible mirepoix (a traditional French culinary combination of onions, carrots and celery aromatics) and additional port. The sweetness of the port helps cut through the fattiness of the marrow. The marrow bones are then cooked on the restaurant’s wood burning oven. Simply scoop the marrow onto the bread for an experience like no other.

The Grilled Octopus is another delight that’s tender thanks to its delicate preparation. It is cooked for about three hours in a mixture of water, lemon juice, and caramelized onions. It’s grilled for flavor and finished in the wood oven with olive oil and lemon juice applied to the octopus. It’s plated with black lentils cooked with olive oil, carrots, onions, celery, and lemon zest. The Moroccan oil cured olives add unique salt notes as well.

Returning to concept of dishes for vegetarians and vegans is the gluten-free pizza – or Socca – that was an idea from owner Phil Slaughter. His wife spent a great deal of time in Nice where she had first tasted them. Kwan tried many ratios and finally settled in on one that was light and crispy. They are cooked in the restaurant’s convection oven, which allows the top of the socca to crisp up simultaneously with the bottom. There are three choices: Sausage with kale, caramelized onion, and olives; Heirloom Tomato with arugula and extra virgin olive oil; and Mushroom with parmigiano, rosemary, and thyme.

Kwan said his first sous chef position was at Picasso in the Bellagio in Las Vegas where all he did was create meat sauce with scallops. He decided he wanted polenta on his menu since it was a fall and winter dish, but he wanted textural differences. He thought creamy polenta and scallops would have been too similar, so he decided to try cakes. He made them the same way as creamy polenta, but allowed them to cool and then portioned them. The result is a scallop dish with polenta, squash, and parsley root that has the best of both worlds – crisp but soft. Kabocha squash is Kwan’s favorite hard squash as it’s both sweet and savory, which he says is under-utilized except at Japanese restaurants.

Kwan said chicken can be boring at restaurants, which is why he wanted to do multiple things to his chicken dish to increase the flavor profiles. First off, he decided he only wanted to use quality chickens.

“I only like air-cooled Mary’s chickens or fresh Jidori, free range chickens,” Kwan said. “They already have great flavor profiles.”

Next, Kwan braises the legs with chicken stock, herbs, and fresh tomatoes. The meat is pulled off the bones and mixed back into the reduced braising liquid and the rest of the hash ingredients. The remaining braising liquid is used as the sauce for the dish as well. Kwan said he taught his cooks the 90-10 cooking technique – 90 percent of the time the breast gets cooked skin side down to allow the chicken skin to crisp up nicely. The other 10 percent is to finish the meat side. The celery root puree adds a savory component to the dish. The hash cake and chicken sauce are sweet as a result of the reduced braising liquid (the carrots, onion, and tomato in the braise). This helps counter the sweetness and allows for slightly different bites depending on the mixture of the sauce and hash.

To wash down these dishes and so many more, AREAL’s Rich Andreoli has created a cocktail menu that’s a mix of classic, contemporaries, and originals.

Hailing from some pretty serious cocktail programs such as Harvard and Stone, Big Bar, and Soho House, Andreoli decided he could bring the idea to the table that cocktails should be treated as a cuisine.

He shops at the farmers market and only uses house made syrups and fresh juices.

Dinner: Sunday through Thursday from 5 p.m. to midnight