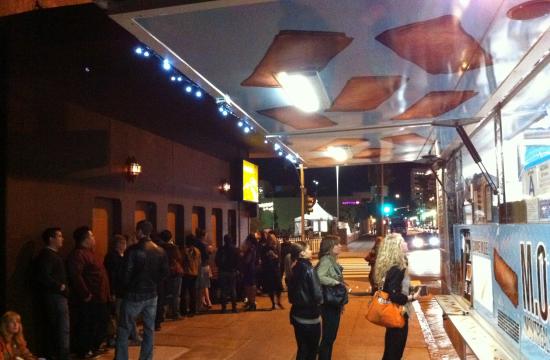 They say truth is better than fiction – that’s why the types of performers and stories at The Moth StorySLAM, better known as two hours of “poetry slam meets bedtime story meets stand-up comedy,” is one of the most popular nights of the month at Zanzibar in Santa Monica.

That’s the easiest (and only) way to explain the concept when you hear a story about Iggy Pop replying to a 16-year-old girl’s snail mail with a hand-written card ending in “call me.” Then there’s the tale about a man who woke up one day to find half his face paralyzed (he finished brushing his teeth before hailing a cab to the hospital). And when you think you’ve heard it all, there’s an anecdote from a woman who had three family members die, her therapist fell in love with her, and her house leased out from underneath her (all within a month) – topped off by an affair with her ex-husband that produced twins nine months later.

Fittingly random and taking its name from the few that stole their way in to founder George Dawes Green’s screen porch during a story-telling gathering with friends, The Moth StorySLAM attracts players and audience members from the local community for an eclectic and surprising mix of short stories that are better than you could ever make up on the first Wednesday of every month.

The night starts as first-come, first-serve with $8 (cash-only) tickets start selling at 7 p.m. with the StorySLAM beginning at 7:30 p.m. People start lining up at 6 p.m. – so arrive early, because by 6:45 p.m. the line will be half way down the block. Bring a picnic dinner or indulge in the M.O. Eggroll truck that will be parked along the curb (or just opt to drink your third meal of the day from the bar inside).

As you chat, snack, and wait, someone giving out little strips of paper will deposit one in to your hand. This strip will contain the theme of the night (also pre-posted on the website) where you are welcome to share your own brief “mini-moth” on the topic. Once you get inside, you are invited to drop your anonymous anecdote in a bag on stage. This stash of distractions will be frequently visited throughout the night (most often in between slams and voting) from which the host will pull from and read aloud – on the last subject of “Rebound,” such tidbits included “In the kitchen: I took a ruined roast and made a delicious soup” and “After my boyfriend cheated on me I got his enemy’s letterman jacket and lost my virginity (underlined).”

Each evening contains 10 stories. Storytellers who would like to participate drop their names in a hat, and play the chance to get picked for one of the slots. Stories are limited to five minutes each (you get two warnings via a pig-shaped flute that you are at or over your allotted time) and are given three scores each by (what appears to be random) pre-selected couples in the audience. At the end of the evening scores are tallied, and a winner is (invisibly) crowned.

While each story will be different – and therefore, each day, night, and neighbor as unpredictable as the last – there are three things that I can guarantee you about The Moth StorySLAM at Zanzibar: There will be a line longer than you’ve ever seen mid-week at 6 p.m. in Santa Monica, the peppered wonton chips and egg rolls will be hot and waiting from the M.O. Eggroll Truck, and your first Wednesday of each month are forever spoken for.

First Wednesday of each month