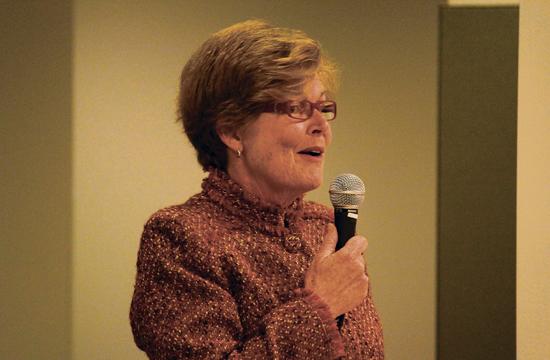 Just as championships in sports are not determined during the regular season, elections are never decided in primary season straw polls or other forms of early campaigning. Of course, there are such things as statement games in sports.

Torie Osborn knew it was not Super Tuesday at the Santa Monica Main Library on Tuesday evening, but the candidate for the 50th California Assembly district sure hoped she made a statement as the Santa Monica Democratic Club resoundingly endorsed her over her two rivals – Santa Monica Mayor Richard Bloom and Assemblymember Betsy Butler.

The endorsement was just the latest in a string of support Osborn has amassed from Democratic Clubs within the new Assembly district; the Malibu and San Fernando Valley Democratic Clubs also endorsed Osborn.

An announced 77 percent of votes cast at the Santa Monica Democratic Club candidate forum supported Osborn, a local “activist with an MBA” who is stumping the newly created 50th Assembly district on key issues of education, women’s and gay rights, and homelessness.

Butler had earned 13 percent of the vote, while nine percent of those voting supported Bloom, who is also a member of the California Coastal Commission.

A little more than 100 people attended the Tuesday evening candidate forum in the community meeting room of the Santa Monica Main Library, where the three contenders for the state legislature answered questions of how they would address the issues confronting California lawmakers and citizens alike.

Through it all, each candidate positioned themselves as a leader of the people, not a disconnected legislator, championing the issues and concerns most relevant to Santa Monicans and others living in the 50th Assembly.

Accordingly, though Osborn was far and away the crowd favorite, there was ultimately very little difference amongst the trio’s campaign platforms.

“I’m not going to Sacramento to legislate more stagnation,” Osborn told the crowd during her closing remarks.“I want to champion fiscal sanity, and I want to champion humanity. I believe we can collectively reinvent California.”

Bloom, who is currently serving in his second stint as Santa Monica Mayor, slightly distinguished himself from Osborn and Butler on a few issues, including raised taxes and

those convicted of terrorist acts or mass murders.

On the issue of tax hikes, Bloom made a case for a more interactive approach with the electorate having a greater say in choosing from a “menu of options.”

Boasting his 13 years of service at City Hall, Bloom said should he be elected to serve in Sacramento, he would carry with him the level of democracy and transparency found in Santa Monica.

“We have a crisis in our state that requires us of doing a better job of working together in order to get things done,” Bloom said.

Both Osborn and Butler claimed they were opposed to the death penalty; neither offered any qualifications of their respective stances on the issue.

No one would be able to make a distinction among the candidates when it came to discussing health care reform, as each expressed support for a single-payer system.

While Bloom, Butler, and Osborn are seeking out the Democratic nomination in the June primary, the race is a significantly lighter in the Republican camp, where Brad Torgan of West Hollywood is the reported sole candidate staking out the GOP nod.

In all, there are 80 Assembly districts.

Based upon the most recent census data, the California Citizens Redistricting Commission

drew each district to include a little more than 465,000 people.

Relying upon her experience in the 53rd district, Butler said she was comfortable in standing up to special interests, even when it was unpopular to do so.

“I stand up and take the hard votes,” she said.“There were a number of votes I had to give this (past) year that have gotten me a few enemies, but it’s the right thing to do.”

Osborn is a community organizer who has worked with several nonprofit advocacy and philanthropic organizations, including Liberty Hill Foundation and the National Gay and Lesbian Task Force in Washington, D.C. She was also a senior policy advisor to Los Angeles Mayor Antonio Villaraigosa on homelessness, poverty, and economic development.