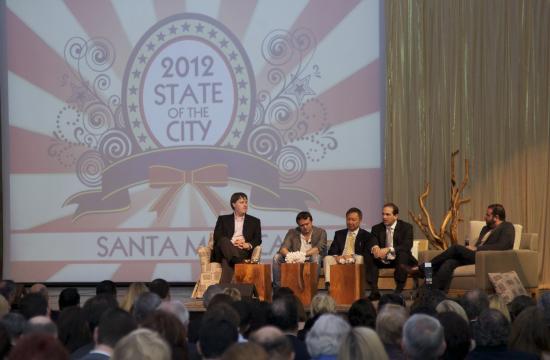 People hailing from local business, government, law enforcement, healthcare, and education filled the auditorium at the SGI-USA World Culture Center on Thursday morning to take part in the 2012 State of the City, in which city leaders hailed Santa Monica as a municipality leading the way in technology, education, the environment, and the economy.

The leading theme of the State of the City, which was hosted by the Santa Monica Chamber of Commerce, was technology, and Santa Monica Mayor Richard Bloom reminded all in attendance of a pair of new monikers quickly gaining in steam and popularity here: “Silicon Beach” and “Tech Coast.”

Or, as Bloom points out, the monikers are the result of local residents and business doing things “Santa Monica style.”

Of course, the “Santa Monica style” of getting things done encompasses more than being Southern California’s answer to Silicon Valley. Bloom pointed out much has been accomplished by the city’s leaders to make Santa Monica an ideal destination to live and do business.

“Santa Monica is now one of the most enviable cities across the country, even the globe, for our environmental initiatives, our excellent schools, our broad web of programs for seniors, children, and the homeless, and our longstanding commitment to building and maintaining affordable housing,” Bloom said.

The mayor also added Santa Monica has the “third highest assessed valuation in Los Angeles County and the lowest office space vacancy rate (for the third quarter of 2011) in the region,” both testaments to solid real estate numbers and a thriving business environment in the face of one of the most intense recessions in recent memory.

“We are now an internationally-recognized iconic city in our own right,” Bloom said.

Case in point: Santa Monica was the destination for nearly 6.5 million visitors in 2011, Bloom said, resulting in a windfall about an estimated $1.2 billion in economic activity.

Other statistics and accomplishments pointed out by Bloom included a nine percent reduction in crime and an increase in successful affordable housing placements.

Monikers and past performance aside, Bloom also added that Santa Monica is in an interesting phase right now in its attempts to transition from a consumption-based, carbon-intensive economy “to one that is built upon energy independence, resource conservation, and technological innovation.”

Bloom also stated that City Hall has worked hard at establishing a vitally diverse local economy while also carefully managing the city’s finances; a pair of key factors in helping Santa Monica to retain a bright future “for generations to come.”

In addition to Bloom’s comments on the State of the City, the Santa Monica College was given the 2011 Economic Excellence Award for serving as one of the municipality’s largest employers and serving as an active community partner.

The local small business CoLoft was presented with the Innovation Award for its efforts in providing collaborative workspaces.

Earning the Leadership Award was Brad Cox, a senior managing director at Trammell Crow Company and chair of the Santa Monica Alliance.

The city’s Office of Sustainability and the Environment hosted the breakfast reception; Chamber of Commerce President Laurel Rosen opened the State of the City with a few thoughts on the significance of maintaining personal, face-to-face relations despite the overwhelming presence of technology in today’s world.