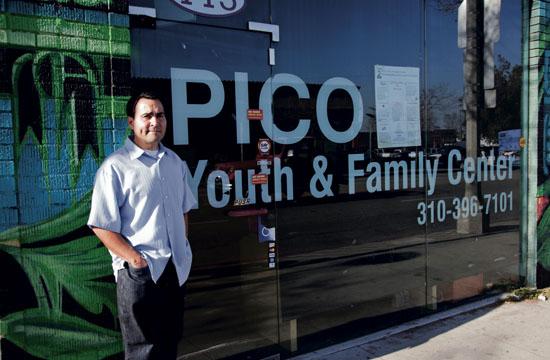 Santa Monica’s gang war of October 1998 that included four homicides and five shootings over a two-week period was pivotal in the creation of the Pico Youth & Family Center, according to Executive Director and Founder Oscar de la Torre.

“There was a tremendous amount of violence that we hadn’t seen in the city’s history,” de la Torre said. “Our response to that was organizing a Vigil for Peace. We had a 1000 people march starting at Saint Anne’s catholic church. We marched through the Pico Neighborhood and we ended up finishing on the block I grew up on – 16th St and Delaware. We made crosses; we put the names of the people that have died violently in the city of Santa Monica since 1989. There were 26 crosses back then. Now the number is up to 40.”

Following the march, de la Torre said he started a movement to create the Pico Youth & Family Center, which involved a series of “meetings, a lot of politics, a lot of struggle to get the City of Santa Monica to fund a process to implement the idea into an organization.”

In 2002, the organization opened its doors as the Pico Neighborhood Youth and Family Center as it initially focused on the community where most of the violence had occurred.

“The truth of the matter is, the Pico Neighborhood looks very different than the rest of the city,” de la Torre said. “It has the highest concentration of low-income families; it has the highest concentration of single-parent families, the most diversity. I would say 60 percent of all Latinos and 70 to 80 percent of all blacks that live in the city live in the Pico neighborhood. It’s historically been a segregated part of the community with the freeway cutting through the middle, you have the city dump, and you have graveyard. A lot of undesirable development is placed in the Pico Neighborhood.”

De la Torre said youth violence and gang activity was a symptom of a larger problem.

“When young people kill themselves over street names where they don’t even own a house, which is what’s going on, there’s something dysfunctional about that,” he said. “There are a lot of reasons why it happens. I look at it from a perspective from poverty being the root cause of it and marginalization and the psychological impact that has on a young person’s development. America will make you feel bad. We even call people trash when they’re poor. There’s a psychological impact that people don’t think about. If you’ve never been poor it’s hard to relate. Growing up poor, and not being poor anymore, you start realizing why people have these behaviors. These young people try to get a sense of belonging; they end up going to jail more than others. In jail, they pick up a bunch of different habits and other things, and now they can’t get a job. ‘Have you ever been convicted of a felony’ is always the last question on a job application, so you create a permanent second class citizen in our country.”

He said individuals who are then released from prison have a hard time trying to snap out of their bad habits when they try to make something with their lives.

“I’ve even had young people essentially tell me ‘I don’t mind if I go to jail, it’s easier in there and harder out here,’” he said. “I ask them how so? One youth told me, ‘I can’t get a job, police are always harassing me, it’s hard to pay rent. In there I don’t have to worry about food, rent, everything is taken care of.’ It’s sad to hear a young person say that.”

As a non-profit organization, the Pico Youth & Family Center is committed to preventing youth violence through various services and caring staff support that bring hope to the lives of youth.

Each year the organization serves hundreds of youth aged 16-24 who are most at risk, through case management, counseling, tutoring, job readiness training, leadership development, music, art, and computer training.

De la Torre said the center was a positive alternative to the streets for many of Santa Monica’s youth and young adults who seek guidance, support, and service.

“When we opened in 2002, we housed the first public recording studio in the city’s history,” he said. “We have three CDs with 20 songs each. They are all original songs, original music, original lyrics, and graphic design. That’s one example how we integrate hip-hop culture into our programs.”

The center works mainly with Latino and African-American youth, but youth of all races as well.

“We use hip-hop as a way to get kids engaged,” he said. “The recording studio is not just to make music and train kids to use the machinery and Pro Tools which is good on its own, but it’s also a bridge builder to build community. It’s a way to do events, have the youth perform; they develop public speaking skills from it and confidence. When they see their name on a CD, it’s like ‘wow’ from the self-esteem boost they get.”

Gabriel Avila, who is 22 years old, has been a member of PYFC since he was a student at Santa Monica High School.

Avila faced challenging family circumstances that led him to hanging out with the wrong crowd in the streets. He found a home away from home at the PYFC.

“The PYFC was there for me when I needed help,” Avila said. “If they didn’t offer the services I needed they didn’t give me the usual ‘sorry, we don’t offer those type of services’ answer. The staff got me the support I needed.”

He said PYFC case managers helped him secure a job and he has now been employed for a year and a half.

“I now live independently and I look forward to getting my GED and eventually a college education,” he said. “My family couldn’t expose me to what I learned from the staff at PYFC. PYFC has instilled in me the value of an education.”

“We’re all about non-violence for peace; unity which is about building community with all people that make our community, and we want to take action and we want to fight for social justice,” he said. “That means making things better. If there are inequalities and there’s people being marginalized and there’s people being hurt by society and the system, we want to correct that. In this society, the north side schools are different than the south side schools. If a kid goes to a south side school it should be the same quality education as if they go to the north side school. That’s what we’re trying to fix. The School District has done some good work in terms of trying to bring parity and funding, that’s an example of social justice. You try to create equal opportunities because not everyone is equal in our society. That’s something that really differentiates us. We just don’t see kids as an empty can to fill up with whatever services we have. We look at these young people who come in as potential leaders, people who already bring a lot of good and they can do a lot of good in this environment, they can give to the community and get involved and be part of a solution instead of being seen as part of the problem.”

De la Torre said part of the solution was to not only help youth with tutoring and homework, but also engage them in the community.

“We really try to invest a lot in young people’s leadership development,” he said. “While we do services like tutoring, counseling, case management, and music programs, we also do organizing. That’s what’s very different about us. In the organizing, we’ve taken on discipline policies in the school district. We’ve taken on environmental justice issues. One example was the City wanting to put a maintenance yard in the Pico Neighborhood. We fought it and they comprised and they gave us a 110 foot buffer zone.”

He said the next campaign its youth are working on is ethnic studies.

“It’s the concept that you should be able to be in the high school taking classes that are not just euro-centric, but a much more inclusive curriculum,” he said. “Or you can take a woman’s studies class or a class on the contributions of gays and lesbians in our society, for example. The idea you can take a course to learn about your culture while you’re on campus with other kids that are not of your culture can also take that class with you. It’s about teaching critical thinking skills and using our diversity as an opportunity to create relationships among diverse students. That’s something young people at PYFC are committed to: making the school change.”

In part three of this series, The Mirror will speak in depth with a young man who has left behind a gang lifestyle and how the PYFC has changed his life for the better.