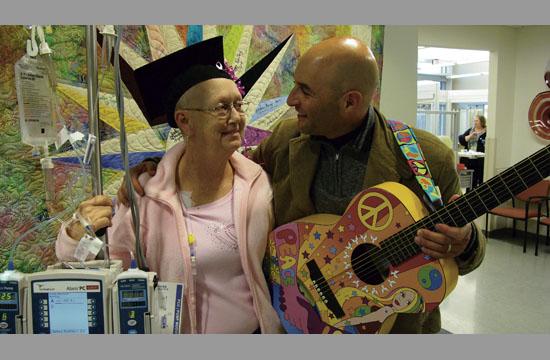 Lustman is a survivor of a one-in-400-million chance of being diagnosed Osteo Sarcoma in his upper jaw, and he says, “they sawed off my jaw,” but that did not stop him from writing, producing, and now performing a collection of pop songs about his journey in order to help others going through difficult life challenges.

“It all began on March 1, 2006, when I got a phone call while I was in the recording studio singing,” Lustman said. “The doctor tells me I have Osteo Sarcoma of the maxilla, a bone cancer in the upper jaw. That’s when the real journey of life began.”

For the next three months, Lustman said it was one of the most difficult challenges of his lifetime.

“They sawed off my upper jaw and the nuked me with chemo for a year to save my life,” he said. “Once they saw off your jaw, and they nuke you with this really toxic pure therapy agent, you lose your enthusiasm. About three months into it, I had a psychological turn around. I went to a positive mental health seminar in Santa Barbara with 20 other cancer patients who were told they had no hope.”

It was at this seminar where he had an epiphany. He decided then and there he would write a pop opera about surviving cancer that he would go all around the world and sing it at cancer centers and theaters to help people going through difficult challenges.

He produced a record of 12 pop songs in 2008 after overcoming his cancer and brought it to the Santa Monica Playhouse from 2008 to 2009 where he ran 88 performances of “Made Me Nuclear.”

In the past three years, he has taken the production and the musical message around the country.

“I sing songs about recovery and put patients in a mind frame of recovery as opposed to feeling down and depressed about what they are going through,” he said.

“I go to cancer centers, schools, churches, conferences that have to do with cancer, I do keynote addresses, and I go into theaters and do the opera as a pure form theatrical performance.”

Currently, Lustman is on a Musical HOPE Campaign across America, bringing his positive and inspirational musical message to everyone.

He is currently closing out the 2011 22-city tour of the U.S.A. campaign with performances in Philadelphia, Boston, and New York City and getting ready for the Musical HOPE Campaign worldwide beginning in the next few weeks.

Lustman said he was forever thankful to be sponsored by a pharmaceutical company in Boston called Ziopharm, which makes a medicine for sarcoma patients.

“Nobody else makes sarcoma medicines because it is so rare that there’s not a big market for it,” he said. “This company is doing something really cool and I’m really proud that they have spent money to send me all around the country and the world to sing about hope at cancer centers.”