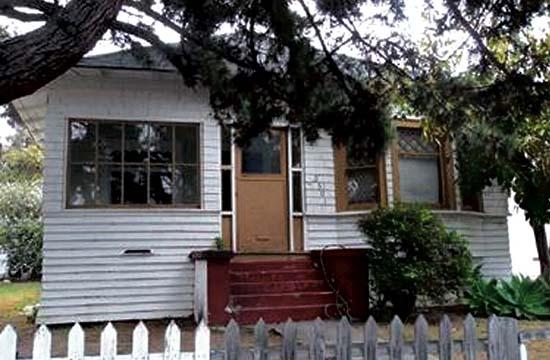 It was a house divided at Council Chambers last Tuesday night, as the Santa Monica City Council narrowly upheld a decision that designated an Ocean Park property as a city landmark.

The 4-3 vote affirmed the Landmarks Commission vote on Feb. 14, 2011, to determine whether a home consisting of two cottages on the 2500 block of Second Street in Ocean Park was representative of Santa Monica’s history and, therefore, should be designated as a landmark.

Both cottages on the property located at 2501 Second Street were built more than 100 years ago; the first was constructed in 1902, and the second in 1907.

A staff report to council members stated only one of the cottages found on the property “exemplifies the early history of Ocean Park and manifests its cultural, economic and social development” and that “it is a fine example of a Turn-of-the-Century Cottage with subtle but refined architectural detailing which is increasingly rare in the City.”

The property’s location on the corner of Second Street and Mills Street also seemed to be an asset, as city staff pointed out the cottages were locally recognizable for their architectural detailing and its setting on a prominent corner in the neighborhood.

In all, there are six criteria the Landmarks Commission relies upon to determine whether a building or property is worthy of “Landmark” status.

Only one of the following six criteria need be met for “City Landmark” status to be granted: the property must exemplify, symbolize, or manifest elements of the “cultural, social, economic, political or architectural history of the City;” the property possesses “aesthetic or artistic interest or value, or other noteworthy interest or value;” and, the property is attached to “historic personages or with important events in local, state or national history.”

Also, the potential landmark may earn its designation if “it embodies distinguishing architectural characteristics valuable to a study of a period, style, method of construction, or the use of indigenous materials or craftsmanship, or is a unique or rare example of an architectural design, detail or historical type valuable to such a study.

Finally, either the property in question must be “a significant or a representative example of the work or product of a notable builder, designer or architect” or it must be situated in “a unique location, (possess) a singular physical characteristic, or is an established and familiar visual feature of a neighborhood, community or the City.”

The Landmarks Commission determined three of the six criteria were met for the front cottage at 2501 Second Street. Specifically, it manifested elements of Santa Monica’s architectural history. Further, commissioners determined the cottage was situated in a unique location and featured “distinguishing architectural characteristics.”

The other structures, including a rear residence and a garage, were not deemed worthy of Landmark status.

A full council was present to vote on the Landmarks Commission appeal; voting to uphold the commission’s decision were Bloom, Davis, McKeown, and Shriver.

Plaster Family Trust filed an appeal on Feb. 23, 2011, citing several deficiencies on the property. Specifically, the appellants noted the two cottages should not receive City Landmark status because of “structural deficiencies” and the overall “poor physical condition of the building.”

The appellants also cited mold and “other hazardous materials and conditions” as a reason to withhold designating the property at 2501 Second Avenue as a City Landmark.

Land use attorney Chris Harding spoke to the council on behalf of the trust and stated a landmark designation for the one home would be cost prohibitive, as the city would potentially shell out too much money to maintain the property.