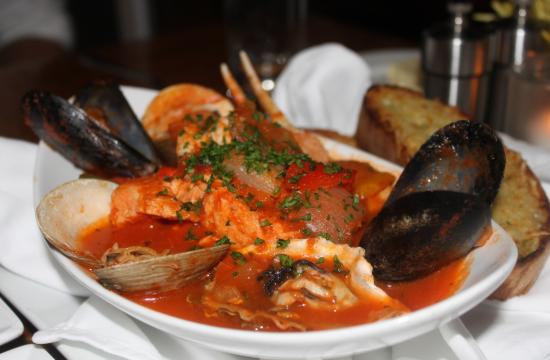 Valentine’s Day may be over, but that doesn’t mean you have to wait another year for an adventurous romantic rendezvous out on the town in Santa Monica. With Cirque du Soleil’s “OVO” continuing through March 25, many restaurants are offering specially-priced menus for show-goers before they head to the Big Top Tent.

Executive Chef Keith Roberts said he has created a prix-fixe menu that showcases some of the restaurant’s best dishes that can be prepared quickly so diners can get in and out so they don’t miss the start of the show.

For $34 per person (plus tax and gratuity), there is choice of four starters and four entrees, and a glass of red or white wine each.

One of Ocean & Vine’s most popular starter items on the special menu is the Santa Monica Chili, which features Laughing Bird shrimp, Baja sea scallops, lump crab meat, and Fava beans. It’s like a chili because it’s very spicy, but it’s almost scampi-style at the same time because it’s got a lot of butter and wine to give it richness.

Another starter that’s popular during the winter months is the roasted tomato basil soup that’s served with a grilled truffle cheese crouton.

A lighter starter is the farmers market field greens with crisp apples, maple glazed hickory nuts, and dried huckleberries with wild rice popcorn. The Hickory nuts are sourced from New England with a flavor profile taking notes like the bitterness of a walnut, but with richness like a pecan. That salad dressing is a huckleberry vinaigrette made from white balsamic vinegar and huckleberries.

The calamari with buttermilk crust is a restaurant favorite that rounds out the appetizer selections.

For the main course, diners can select from two seafood dishes, a chicken dish, and a vegan dish.

Roberts said the Steelhead Salmon dish was leaner and milder in flavor than most other salmon on the market.

“I know a lot of people like the salmon, they like the oil content, and they like the strong flavor, but this is just a little bit subtler difference and I like the more local attraction of the Steelhead,” Roberts said. “We have our lobster risotto which is a nice risotto with corn, fennel, and peas in it and of course some lobster meat in the lobster dish. We finish the dish with some fennel pollen, which gives it a nice nose touch when you take it to the table.”

The Seafarer’s Stew is a hearty tomato-based stew that has oysters, mussels, crab, scallops, shrimp, salmon, and shark. It’s created using a shrimp stock that’s made in-house. This fun winter dish is served with house made garlic bread.

“We spice it up with maple pepper bacon instead of just bacon,” he said. “The chicken is seared then it’s braised in the oven with the bacon, with the red wine, with the onions, and we use a good variety of forest mushrooms. It’s that classic dish with that nice reduction of heavy red wine, the nice demi glaze, and that richness on the tongue that you get from the upscale mushrooms and bacon that go with it.”

To round out the mains is the Vegan fettuccini. The Alfredo sauce is made from parsnip puree and olive oil. It’s got a unique earthy flavor of the parsnip, but it’s also got creamy finish like an Alfredo sauce. Asparagus is sautéed with mushrooms, sun dried tomatoes, and artichokes in an olive oil, garlic and basil base. The fettuccini is boiled in tomato juice, which gives the dish a hearty feel that vegans will appreciate.

Ocean & Vine is located just one block away from the Cirque du Soleil performance, which is taking place under the trademark blue-and-yellow Big Top by the Santa Monica Pier.

“OVO” features many stunning acrobatic acts including a stunning flying trapeze act: Six flyers fly as high as 46 feet, making this act the biggest of its kind ever presented under a Grand Chapiteau (Big Top). This act is the most difficult in the world to execute in terms of the distance between stations. It combines many circus disciplines: banquine, Russian swing, and swinging chair.

Combining hand-to-hand, ballet, contortion and an aerial flying act, the two artists in the Butterflies act perform a pas de deux on a rope that allows them to swoop and land, leap and fly in perfect unison.

Ocean & Vine is open for dinner from 6 p.m. to 10 p.m. daily; the Sushi at Sunset sushi bar opens at 5 p.m. For reservations, call 310.576.3180 or visit www.oceanandvine.com. For tickets and more information on “OVO,” visit cirquedusoleil.com/OVO.