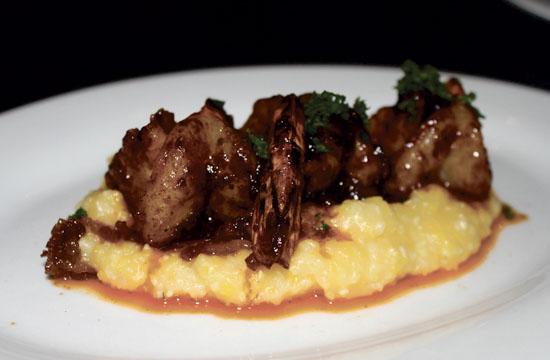 Next Door by Josie is the new kid on the Pico Boulevard block after opening its doors last September between 24th and 25th streets. And as the name suggests, it is located right next to Josie Restaurant, which has been a mainstay in the Pico Neighborhood since 2001.

The two restaurants are inter-joined by way of the kitchen, which has been an interesting learning curve for the kitchen staff, according to owner Josie Le Balch.

“It’s been a little bit of a balance of a dance that we do,” Le Balch said. “We’re doing fine dining on the one end at Josie and then we’re doing casual dining on this side and there is a lot of crossover with some of the products. It’s been non-stop.”

A quick glimpse at the menu and you’ll see you’re going to be in for a completely different experience from the fine-dining at Josie.

For instance, the small snacks section features “beer and bacon caramel corn,” “deviled eggs with duck crackling,” and even a “house pickle jar.”

The American-inspired charcuterie bar has a selection of five cured meats and five cheeses that’s priced $5 for one, $14 for three, or $21 for all five.

There is also a soup and salad selection where quality isn’t sacrificed when it comes to quantity. The sloppy roast pork sandwich is a beast in size with fried rapini, aged provolone, and garlic mayo ($14). For a lighter sandwich, try Mai’s Duck Confit ‘Bánh Mì’ with pickled daikon and cucumber (also $14).

Le Balch said Next Door by Josie had been well received because she said it was a place anyone could go for some charcuterie, a glass of wine, or a full on meal.

“When we first opened, we weren’t selling very many of the entrée courses,” she said. “I talked to a few of the people coming in, and they were like ‘Oh no, we are working our way through the menu.’ It took about three weeks before they got down to the bottom and start trying the entrees.”

When you do work your way down the menu, you will find tarragon-roasted half chicken with garlic mash and sautéed greens ($20). The thin pan-seared prime rib eye with baby mizuna and kennebec potatoes ($23) has plenty of flavor thanks to the cut’s marbling, a light seasoning, and a red wine sauce. The ‘staff meal’ penne comes with missouri jowl bacon and spicy tomatoes in a cream sauce ($17) while vegetarians can enjoy the farmers’ market vegetable pot pie with a white cheddar crust ($18).

There is always a fish of the day as well as a steamed mussel dish with elk chorizo and a curry coconut broth.

Next Door by Josie also offers a special early bird board from 5 p.m. to 7 p.m. Tuesday through Friday.