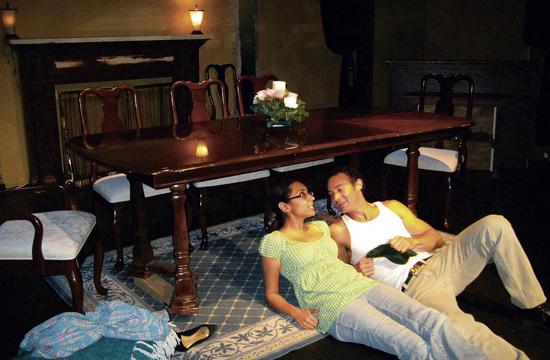 “The Dining Room,” a play that earned writer A. R. Gurney a Pulitzer Prize nomination in the 1980s, is a collection of 18 vignettes that’s currently playing Friday and Saturday nights at Santa Monica’s Promenade Playhouse through March 3.

While unconnected in plot, the vignettes share a strong theme and strive to show the changing attitudes about the home and family over many decades. The earliest story takes place in 1932 to the latest in 2000.

Each decade is given its own attention and allowed to flavor the scene at hand, but the true joy of this play is the different relations and landmark moments in life that are touched upon.

The play opens with a businessman who is in the market for a house, but only for a short time. He and his family travel every six months or so for his job. For him, it is not the house that makes a home, but the people inside it. This wonderfully sets up the next piece, which features a bickering brother and sister who are home to divide up the family’s belongings. They care a great deal more about who gets the dining room table than each other’s feelings on the matter.

As the play progresses, it runs the gamut of emotions. While it is at one moment hysterically funny, the next, can be heart breaking.

In 1990, a carpenter woos a woman who, along with her dining room table, is in need of a little loving attention. This moment of comic relief is followed directly by a Thanksgiving tableau set in 1970. This scene pulls heavily on the heartstrings, as the matriarch of the family is unable to recognize her sons.

A stand out moment towards the tail end of the production came from the 1948 scene wherein a father, hilariously acted by Tom Malee, is informed of a grievous insult laid upon his brother at the local club. He informs his family that he is off to right the wrong and to defend his brother’s honor. His family gives him a send off fitting a man going into battle.

One of the final scenes is a quiet moment between a man and his son. The father must lay out his final wishes for his funeral and what is to be done after. His strong feelings on what is garish and what is proper give quick moments of levity and realism to an all too tragic conversation.

Lovingly directed by Natalia Lazarus, the play functions in two ways. First as a commentary on the way that family life has changed dramatically over the years. The style in which we live has become terribly casual. No longer do we dress for dinner in our own homes. The good china comes out once a year, if that. We don’t have maids who bring us our orange juice in the morning at the ringing of a bell. Most family time these days is spent eating take out around the television. However, this collection of moments taken from lives we all can relate to also reminds us that while fashion and social conventions shift with the generations, the moments that we remember the clearest, for good or for bad, happen in the most ordinary of places. They happen in our homes with the people that we care for the most, our families.

Run: Friday–Saturday through March 3 at 8 p.m.