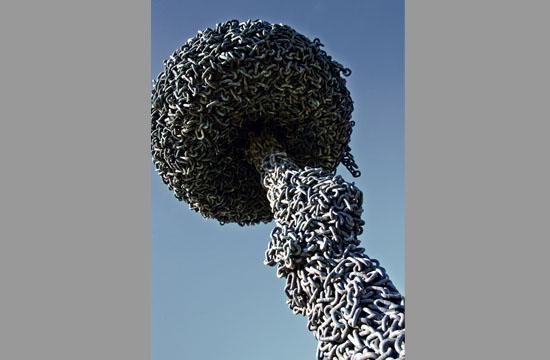 The political cartoonist who earned a spot in Santa Monica lexicon because of a tall structure that doubled as a controversial piece of public art is no longer around to influence how this brewing fight will turn out, but the future of the “Chain Reaction” sculpture residing in front of the Civic Auditorium appears to be quite bleak.

A gift to the city by Los Angeles Times political cartoonist Paul Conrad in 1990, Chain Reaction has slowly been deteriorating thanks to the sea air and weather patterns over the course of three decades.

At a joint meeting of the Santa Monica Arts Commission and the Public Art Committee at the Civic Auditorium on Wedneday, the two advisory groups collectively recommended that council members approve the deaccessioning of Chain Reaction unless a benefactor steps up within six months to cover the costs of the sculpture’s much-needed repair.

According to city staff, Chain Reaction is in need of major conservation work and its structural integrity appears compromised.

In order to restore Chain Reaction, staff estimated the costs of repair and conservation would range from $227,372 to $423,172.

With the elimination of the redevelopment agency (RDA) on Feb. 1, City Hall made it clear there is very little money, if at all, in the general fund to cover the repair and conservation costs.

“The issue of the cost of the repair and conservation is complicated by the fact that the core of the sculpture is fiberglass with an unknown life expectancy in terms of its structural stability,” said Cultural Affairs Manager Jessica Cusick.

More testing of the sculpture is still required, Cusick said, before a final determination of Chain Reaction’s structural integrity could be fully ascertained. Such testing may cost City Hall an additional $15,000.

While the extent of the sculpture’s structural stability has not yet been fully ascertained, City Hall has already doled out about $28,000 for the initial assessment and testing assistance. Another $13,000-plus was spent on initial testing of the sculpture and for a structural engineering report.

Local activist Jerry Rubin expressed his desire to keep Chain Reaction in place despite the costs. He started a petition to preserve Chain Reaction, hoping to gain enough signatures to ultimately convince City Hall to find a way to keep the sculpture on Main Street, directly in front of the Civic Auditorium and across from the RAND Corporation headquarters.

“(It would be) a loss culturally, artistically, educationally, and politically,” Rubin said. “We should be saying, as a city, that we’re going to do what we can to get the resources together to restore this. If we show our commitment to public art, specifically Chain Reaction, that’ll have a snowball effect. Maybe it’ll help generate support to help fund other public art projects.”

Chain Reaction, which was created by Pulitzer Prize cartoonist Conrad, was offered as a gift to Santa Monica in 1988.

After a tense public input process in 1989, about 730 Santa Monicans urged then-council members not to accept the sculpture for public display within the city, compared to 392 residents in support, according to a staff report. Interestingly enough, the then-members of the Arts Commission voted three times to accept Chain Reaction as a gift.

Council members ultimately voted to accept the gift in October 1990, with the Santa Monica Arts Foundation receiving a private, anonymous donation of $250,000 to help fund the sculpture.

City Hall also points out Chain Reaction was originally to be built as a bronze structure in order to minimize maintenance. When fabricated and erected, however, Chain Reaction was ultimately “made of copper tubing over a fiberglass core with an internal frame of stainless steel,” according to the staff report.

The staff report further stated that the materials “while durable, do not have the same permanence in an outdoor setting as cast bronze.”

In 2011, a city building inspector prompted an inquiry into the structural integrity of Chain Reaction. A consulting team was assembled to inspect the sculpture and assess the physical state of Chain Reaction.

With the recommendation of deaccession of Chain Reaction should fundraising efforts fail, it is now up to council members to ultimately decide upon the sculpture’s fate. According to Cusick, council members will be deliberating on the issue as early as March 20.

Should Chain Reaction ultimately be taken down, City Hall would work directly with the Conrad family in disassembling the sculpture. Where Chain Reaction goes from there will be up to the Conrads.

The Public Art Committee voted 10-0 to recommend deaccession of Chain Reaction, with the two caveats: a six-month window be left open for potential donors to fund the preservation of the sculpture; and no additional city resources be expended in the fundraising efforts.

The Arts Commission adopted that recommendation by a 10-1 vote (with two members absent).