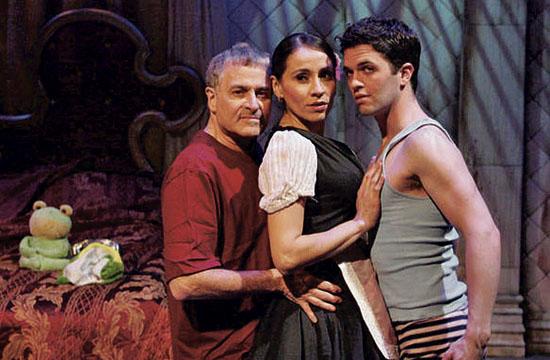 “HUNGER: In Bed With Roy Cohn,” written by Joan Beber, is currently a guest production on stage at the Odyssey Theatre and attempts to get into the mind of Roy Cohn (no relation to your reviewer), one of the most infamous people of the last century. A closeted gay Republican attorney, he was responsible for prosecuting Ethel and Julius Rosenberg resulting in their execution as spies, and was Joseph McCarthy’s Chief Counsel on the notorious House Un-American Activities Committee which ruined lives by accusing countless people of being Communists, a notable black mark in American history.

Playwright Joan Beber attempts to cover the final day of Cohn’s life in a play that is disjointed, lacks focus, and whose characters are simply cardboard cutouts with cheap clichéd mannerisms imposed for effect purposes. Is it a comedy, a tragedy, a musical, a drama, or a Theatre of the Absurd piece? It is all of the above and none of the above, lacking what is known in the “trade” as organic truth, with pieces of business – (scripted or directed?) arbitrarily imposed on the ensemble of very competent, professional actors who must be congratulated for servicing the material as written and directed.

Played valiantly, by a talented Barry Pearl, Cohn is in bed as the audience files in. Hugging his froggie, in short order, we learn he is in his own Purgatory and is dying (he actually died of AIDS). In short order, his life begins to flash before him with the key people in his life appearing to either confront or reenact pivotal moments.

Cohn eats a tuna fish sandwich prepared by his sexy, seductive housekeeper Lizette, played with flair by a charming Presciliana Esparolini, who has removed the crust from the bread as instructed by his domineering Jewish mother Dora, a comic strip character played by a talented Cheryl David, who obviously followed as directed and does a creditable job, given the writing and directorial demands. Pearl, wearing a froggie hat, talks to his stuffed froggie and soon we are treated to a medley of burps and farts (always good for a cheap laugh) and Esparolini dances a version of the Cha Cha. Don’t get me wrong. She’s a terrific dancer and it would great to see her in a real musical, but in this context, it’s just plain silly.

Under the usually skilled direction of Jules Aaron, Cohn’s life gradually begins to unfold before our ultimately unbelieving eyes and one by one the key people who had been in his life begin to appear in a series of flashbacks. A beautiful young man appears from under the bed and dances. Yes. Dances. Hence, another non sequitur musical number, which has no reason for being. In point of fact, if all the sophomoric, unimaginative, unoriginal, dance numbers by choreographer Kay Cole were surgically removed, the script might be salvageable as the narrative deals with historically interesting issues, but unfortunately the playwright got in her own way by trying to do too much. As they say, less is more. Ah. But like this play, I digress. So, back to the beautiful, scantily young man who is forced to dance around the stage. You might be asking yourself, who is this person? Well, it turns out, he’s the younger version of Cohn who is silent throughout most of the play, acting as Cohn’s alter ego.

In keeping with introducing key players in his life, we meet G. David Schine, Cohn’s lover played by Tom Galup, who never gets beneath the surface, but has a pivotal role, appearing and reappearing throughout the muddy proceedings. Dora refuses to believe that her son is a homosexual and does everything she can to discourage their relationship and puts herself in the middle of them in bed. The extremely loving, touchy, feely relationship between mom and Roy is spooky and feels like it’s bordering on being incestuous.

We next meet Julius Rosenberg, played by Jon Levenson, who confronts Cohn about his role in sending him and his wife to the electric chair. We never see Ethel, but do hear from her and images designed by Adam Flemming take us back to that painful time in our history. Levenson gives one of the purest performances, avoiding cliché choices. I wish the same could be said for Liza de Weerd who gives a pathetic rendition of journalism icon Barbara Walters, reducing her to a goofy scatterbrain, and David Sessions’ caricature of Ronald Reagan, while a crowd pleaser, should have most definitely been reigned in by the director. Both these characterizations might be good material for “Saturday Night Live,” but this is not good stagecraft.

Throughout the proceedings, people enter from under the bed or from through a curtain behind the bed and Cohn’s life continues to flash before him through the inappropriate gimmick of music and dance. And, gimmick it is, as the musical numbers are imposed and do not grow organically so that instead of moving the story forward, it causes arrested development. Oh yes. In keeping with the bag of tricks, director Aaron has thrown in several strobe light sequences as well as Pearl, and the audience, having to endure frontal nudity. As far as poor mom is concerned, well, she ages and even has a stroke and David’s Dora does her best to invest these transitions with a semblance of truth.

It’s a relief that this is not a Odyssey Theatre Ensemble production, but a rent-paying guest production as given Artistic Director Ron Sossi’s brilliant, pioneering theatrical record, I believe he would have tossed this show out after the first nibble.