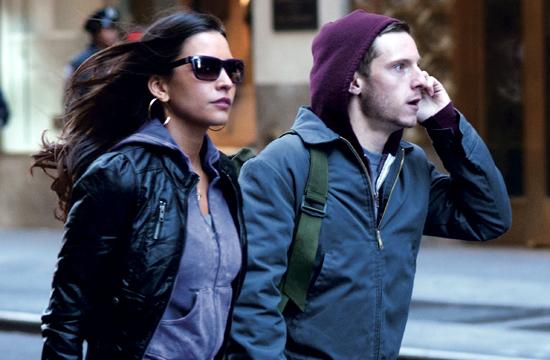 Jamie Bell captured hearts and minds in his breakout role in “Billy Elliot” where he played a young man who wanted to dance but had to keep it a secret in order to avoid scorn. In real life, he actually was born into a family of dancers that included his grandmother and mother, as well as other family members, and started dancing at age six. Like the “Billy Elliot” character, which was actually based on Bell’s life, he endured harassment, but persisted in his dance studies despite being called “Ballerina Boy” by his classmates. For his performance in that film, Bell won a Best Actor British Academy Award (BAFTA) beating out Russell Crowe, Tom Hanks, Michael Douglas, and Geoffrey Rush. A working actor ever since “Billy Elliot,” Bell’s films include “Nicholas Nickleby,” “King Kong,” “Flag of Our Fathers,” “Defiance,” “Jane Eyre,” and “The Adventures of Tintin: The Secret of the Unicorn.”

Genesis Rodriguez is considered an emerging Hollywood talent and has appeared on “Days of Our Lives” and as Sarah in HBO’s “Entourage.” She has recently been cast to play opposite Will Farrell in “Casa de mi Padre.”

Bell and Rodriguez recently sat down with a select group of journalists to discuss, among other topics, their latest film, “Man On A Ledge” a caper thriller directed by Asger Leth in which they co-star with Sam Worthington, Ed Harris, Edward Burns, Anthony Mackie, Titus Welliver, and Kyra Sedgwick.

The following interview has been edited for continuity and print purposes.

You had to crawl through a pretty tight, enclosed space. Was that a challenge?

Genesis: You know I didn’t think I was claustrophobic, but the second I got into the vent, things changed. I was thinking ‘Why am I in this confined space’ and I was silent because I was literally too nervous in there and wanted to get out as soon as I got in. I did that take around nine times and it was unbearable. Try being in a harness in that cat suit costume – not a good idea.

So how did you overcome it?

Genesis: I didn’t overcome it and I wish I would never do anything like that again. It was horrible. When I imagine that being buried alive thing, it takes my breath away.

Why did you decide to do the film?

Genesis: Obviously what called to me were the script and my character. I thought she had a lot of attitude and was feisty. She was fun to read and I thought it would be a fun role to act and I really enjoyed her. I fought for that role. I did the audition process. I had two callbacks and a chemistry read and then waited a month before I knew that I got the job. I had no hope of landing the job, but I’m glad I did.

Jamie: I thought the screenplay was good and was a good thriller. I thought my role was one of the best ones and our relationship was fun. I also thought the rest of the cast was really good.

Genesis: I don’t think he wants to answer that because he doesn’t want to compliment any more. He’s sick of it. I can say he gave me great memories. He made me laugh and I couldn’t have had a better Joey (Jamie’s character). That’s all you can ask for from an actor.

Jamie: I think it was that we both have similar comedic instincts and sense of humor, something that I’ve always had but never felt comfortable to play with, so she made me comfortable enough to kind of mess around with that stuff and it was cool. It’s fun to work with someone you can have fun with and the director trusts you and puts the camera down and lets it roll. He gave us the scenario and then told us to figure it out.

If you had to actually plan a heist, who would be cooler, you or Genesis?

Genesis: What are the circumstances? (Laughter)

Genesis: I need lots of money. Okay. As in the film, I would come up with a huge diversion as well, and yes, I think I would be cooler (laughter).

Jamie: Actually, I don’t think I’d ever do that.

Genesis: Maybe you would if it was a life or death situation. But, I wouldn’t do it on the weekends, if that’s what you’re asking me (laughter).

Have you worked together before?

Jamie & Genesis: No we haven’t.

There seemed to be a lot of stuff going on between the two of you. Was it all scripted or did you improvise?

Jamie: Some stuff was scripted and some wasn’t. Honestly, we felt silly most of the time because we were having a lot of fun. When we shot our part of the film, a lot of the cast had already wrapped so we felt like we were kind of like in our own mini movie. We were given a lot of freedom, so a lot of it was made up as we went along.

What was like working with Hollywood icon Ed Harris?

Jamie: Ed is awesome and to me, he’s many things. He’s John Glenn and Jackson Pollack so he’s kind of like Jesus. When he walks onto the set, there’s a change in the air because you know you are in the presence of a master. He really embodied his character between takes because he thought his character (David Englander) needed to be transparent at all times. Since his character was lying all the time, he came up with this kind of this obsessive character trait that he needed to keep everything clean so literally, in between takes, if his office set got messy, he would take a vacuum cleaner and vacuum.

Did you pick up anything from his technique that you could incorporate into your own method of developing a character?

Genesis: Staying in character when the camera is not rolling is fascinating. Literally, if you had a conversation with him on break, he’s not Ed Harris – he’s Englander.

How was it working with Sam Worthington who plays your brother and did your different accents become a problem? (Bell is English, Worthington is Australian)

Jamie: Luckily we were not in the same scenes together because accent wise it would have thrown us all off. Actually, we barely hung out. He was busy and exhausted from being on that ledge the whole time. Sam is the kind of actor who makes things better. He always tries to make logic out of the script and tries to make it better. It’s a wonderful trait.

Was it difficult transitioning from an award-winning kid actor to the young star you are today?

Jamie: After “Billy Elliot,” I went back to school and had great representation, which is crucial. They managed to get me into the right rooms with the right people. You kind of fall into a clique of people so I was fortunate…(Someone brings in a coffee for Jamie)

Genesis: You know you’ve made it if someone brings you coffee without your asking for it (laughter).

Jamie: I actually asked for it (laughter). Anyway, getting back to your question with regard to my career, I’ve been very fortunate and that’s the truth. There were no tricks or strategy. I really didn’t have a struggle. I’ve been at it for 11 years, quietly working and taking smaller roles in big movies. It’s been about finding your footing within a very large and tricky industry.

Genesis: It also helps that you’re an incredible actor. You could be a really cute child actor and not have any substance. This guy has had substance since he was born.

Jamie: I want to touch your head but I’m worried that I might mess up your hair (laughter).

Genesis: You can’t touch my hair. It’s taken a long time to get it to look like this. You can touch my aura (laughter).

Jamie: Have you interviewed Sam (Worthington) yet or are we the first? Genesis: (Directed to the journalists) What have you been doing all day?

Jamie: They’ve been eating. They like to load them up on food. It makes them feel happy so then they’ll write nice things about us (laughter).

When you were growing up, who were the actors you admired?

Jamie: (To Genesis) Do you want to go? I feel like I’ve talked too much.

Genesis: No. Okay. Who did I admire? I loved this incredible famous Argentinean actor named Ricardo Darín. He is one of the reasons why I chose to be an actress. I love Penelope Cruz. Look. Our profession is extremely hard and it’s a challenge to everyone. It’s not easy. I admire everyone who’s in this business. You have to be focused and have a certain determination. At the end of the day, we live to entertain people so it’s a beautiful thing. Sorry. I went cheese for a moment.

Some of the actors you’ve mentioned are method actors. Is that your technique as well?

Jamie: Some of them are method actors, but Olivier not so much. Oliver Reed, who played an alcoholic, was pretty good at that (laughter). I also have a lot of respect for comedic actors because it’s great to make people laugh and it’s really hard. I liked David Niven and I think Peter Sellers was a genius. I also like transformative actors like Gary Oldman who keeps changing with every character he plays.

Do you often get back to England?

Jamie: At least three or four times a year. I’m going to make a movie there next week.

What do you miss most?

You’re filming “Last Stand” with Arnold Schwarzenegger. Is he rusty?

Genesis: No, not at all. He does his own stunts and actually got hurt and had to get stitches. You don’t want to know how that happened. It was a dumb thing. He ran into something. It’s the dumb things than can really hurt you.

Jamie: That’s a good life’s lesson: It’s the dumb things that can really hurt you (laughter).

Genesis: He’s actually impressive. When I first met him, I was so intimidated. I mean this is Arnold we’re talking about. He’s a true action hero star and I can’t believe I’m in one of his movies.

Did you make any New Year’s resolutions and did you keep them?

Genesis: This is my New Year’s resolution, which was yours. (Points to a package on the table)

Genesis: I’ve completely stopped with Nicorette. I’m not endorsing it, but it’s working for me.

Good luck on all your projects.

Jamie and Genesis: Thanks. This was fun.