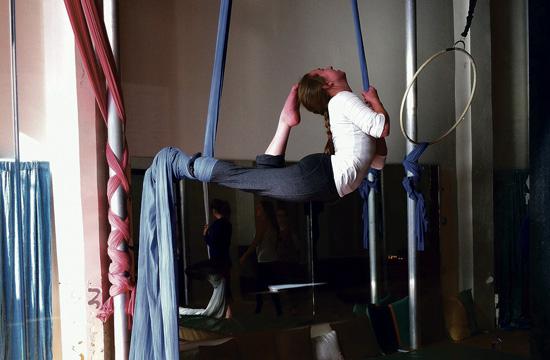 The circus is in town and magic is in the air. But it’s not the type where you sit, riveted, trying to figure out the secret behind the trick; it’s the kind where you sit, in marvel, thinking “how ever did they train their bodies to do that?”

Luckily, you won’t have to wonder any longer, and you can even experience it in first person right here in Santa Monica thanks to the recent opening of TSNY Aerial Studio 1.

If you’ve been on the Santa Monica Pier in the past three years, the name TSNY should sound familiar – it’s the owning name of the first SoCal TSNY location, which is an outdoor trapeze school located east of the Ferris wheel. Aerial Studio 1 is the close-by indoor version that hosts the equipment for the expanding array of circus arts that couldn’t fit next to the gigantic trampoline and apparati at the original location.

Standing tall a store or two south of Wilshire on 7th Street, Aerial Studio 1 is almost as narrow as it is tall.

The studio itself has floor to ceiling windows, wood floors hidden by gymnastic mats, and the most eye-catching components of all – the thick ribbons of rainbow silks, the lyra, and the static trapeze dangling from the ceiling.

Offering several classes each day (private or group) the Aerial Studio 1 can teach you how to wrap, hang, bend, swing, and pose from a smorgasbord of circus art equipment:

Silks: Rigged from the ceiling and doubled so you have two pieces to use, the “silk” is a strong and slightly stretchy fabric. Students learn to wrap and climb, pose, and fall.

Static Trapeze: In contrast to the flying trapeze, the static trapeze hangs straight from the ceiling and is used as a mode of display for the artist to work through each acrobatic routine.

Wondering whether you should stop by? I would say it’s worth a visit for everyone (even if you just watch). You will like Aerial Studio 1 if you are or ever were a yogi, gymnast, or dancer.

Most students tend to be female and in their early teens or mid-20s to late 30s. The youngest participant is a six-year-old boy (and the oldest, a late-60s self-described adrenaline junkie grandma). The recommended attire is anything fitted, and whatever won’t fall over your head if you are upside down.

Items of note: Expect the addition of a trampoline in the near future. Aerial Studio 1 is open for intermediate and independent artists for a flat rate. It’s also available for birthday parties.