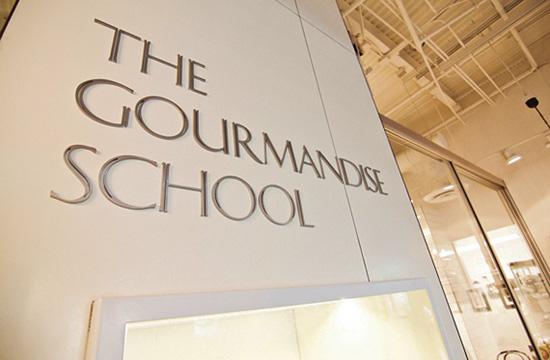 If the thought of rolling pie dough or cooking up a home-made dinner strikes fear in your heart, you’re not alone.

“We can smell the fear, and so do the ingredients,” say cooking school pros Clemence Gossett and Hadley Hughes about the jitters that students sometimes bring to cooking class.

“There are two things we tell people when they come to class,” says Gossett. “First, we greet them warmly and tell them to feel at home, ask questions, look around in the pantry. And we tell them to leave their fear at the door.”

Gossett and Hughes are co-owners of The Gourmandise School of Sweets and Savories, a cooking school where anyone at any skill level – from recreational cooks to professionals – can learn to become a better cook.

“We want everyone to master the techniques before they leave class,” says Hughes. “Last week there were two students in my cream puffs and éclairs class who were really struggling. I stayed with them and helped them make extra batches until they got it. They went home really knowing how to do it and feeling so much better.”

There’s lots of classes to choose from. Some popular choices are French macaron cookies, cake pops, pizza, Thai food, and Dinner in Provence. Students learn to make everything from scratch, using classic techniques and seasonal ingredients. Students also learn tips about the chemistry of food, about how ingredients behave when heat, cold, or movement is applied. The school also offers professional-level classes that meet over eight weeks.

“We want to teach our students in the same way they would learn if they were working at a bakery or a restaurant,” says Gossett. “It’s a systematic approach that makes you a very efficient cook.”

Students work in a gleaming open kitchen outfitted with both commercial and home equipment. Gossett and Hughes are masters at creating a friendly, fun atmosphere as students pair up and cook together, learning as they go. At the end of class, students take home a box full of their hand-made creations.

“I like this school a lot because you really get hands-on experience,” said Arcadia resident Joyce Chen, who recently took an advanced French macaron class. “At a lot of other cooking schools, you just watch a cooking demo or you get to make maybe three out of six recipes in class. At Gourmandise, you get to make every recipe, and you do every step of the way so it really helps you to learn. It was super fun!”

Gossett and Hughes met almost three years ago in a biscuit baking class and decided to become business partners. At first, they taught their classes in the kitchens of other businesses in Los Angeles, but they wanted to build their own space. That dream was realized in May 2011 when they opened the doors to The Gourmandise School on the rooftop dining deck at Santa Monica Place.

“It feels great to have our own space and be able to control the quality of our classes,” says Gossett.

As part of the business and food communities in Santa Monica, the pair believes in keeping things local.

“The biggest effect you can have on the economy is to spend your money locally,” says Gossett.

She says she sources all the ingredients locally, except butter, and loves the synergy and strong sense of community that exists among the businesses in the mall’s dining deck. Acclaimed restaurateur Piero Selvaggio, who owns the Norcino Salumeria meat and cheese shop next door, has been known to drop into pasta class and talk passionately about the three-ingredient miracle that is pasta.

Working with the Santa Monica farmers market, the Gourmandise School offers a free “Follow That Chef” series that starts with a shopping tour of the downtown Wednesday farmers market and proceeds to a chef demo back at the school. Past chefs in this series include Joe Miller of Joe’s restaurant and Mark Gold of Eva restaurant. Upcoming events in the series will be led by Chef Kirsten Gum of the Travel Channel’s Treasure Hunter on Feb. 22 and Chef Annie Miller of the celebrated bakery/cafe Clementine, on March 28.

This summer there will be a new course just for kids. The course will introduce kids to the world of food, where it comes from, the chemistry of food, and how to cook without using cans or boxes.