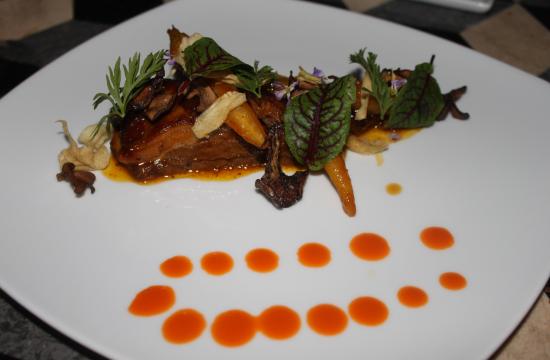 Three years ago, Tony DiSalvo came on board as executive chef at Whist restaurant at Viceroy Santa Monica – and it only took him about two months to overhaul the menu and introduce a Mediterranean theme.

Prior to his arrival, the Ocean Ave. hotel only had about six appetizers and six entrees, but now there are more than 40 items on the menu.

“It’s modern, it’s laid-back, it’s market-driven, the menu changes a lot, and it’s a pretty inexpensive restaurant with a lot of options as far as price points go,” DiSalvo said. “This was the first time I have come into an existing restaurant and taken over. Before, I’ve opened three restaurants where I hired an opening staff and training was done from the beginning, building ground up.”

DiSalvo’s culinary savvy is on full display as his dishes are created with a modern twist, showcasing produce sourced both locally and globally.

The shrimp toast is one dish that uses unexpected combinations of flavors and spices. First, a “shrimp mousse” is created by combining shrimp with coconut milk, lime, Thai chilies, fish sauce, shallots, and garlic. It’s then spread in between two pieces of brioche, quickly fried, and finished in the oven. Its Asian influence continues with a salad of fresh green sprouts with peanuts, basil, mint, pink grapefruit and dressed with a Thai vinaigrette consisting of fish sauce, garlic, lemon grass, lime juice, palm sugar, and Thai chilies.

The whole roasted Loup De Mer (sea bass) is caught in the Mediterranean and cooked whole on the bone – the best way to cook any fish, says DiSalvo.

It’s done Italian Riviera-style with fennel, tomatoes, capers, olives, zucchini, and basil that’s cooked together with vermouth to let everything melt together before it’s finished with some lemon juice.

The Roasted Main Lobster has flavors of southern France with its white bean puree. It’s a hearty dish with the butter-poached tail served whole. The claw and knuckles don’t go to waste, as they are part of the dish in the form of tortellini and are garnished with roasted mushrooms and fennel.

Moving away from the seafood selections, the Veal Tenderloin is cooked in a mixture of butter and olive oil while wrapped in a thin layer of prosciutto. When the prosciutto is crispy in the pan, it’s taken away from the veal during the final cooking stage of the meat, but it is then used as a garnish for the dish to give it an unique textual element.

DiSalvo said he chose the Mediterranean theme for the menu because he comes from a Sicilian family.

He said the Southern California climate allowed him to source a lot of produce grown in similar climates to the Mediterranean – all accessible from the Santa Monica farmers markets twice a week.

“The product is so good and the Italian philosophy of cooking is to not really do that much to the food, but let the product speak for itself,” he said.

While the majority of the produce and meat are local, he does source capers, olives, anchovies, vinegar, and olive oil from Spain and other surrounding European countries.

The special happy hour menu features items that are $7. The selection includes cocktails, wine, beer and bar food such as meatballs, mussels, chicken wings, and hummus.

Dinner: Monday through Saturday from 6:30 p.m.