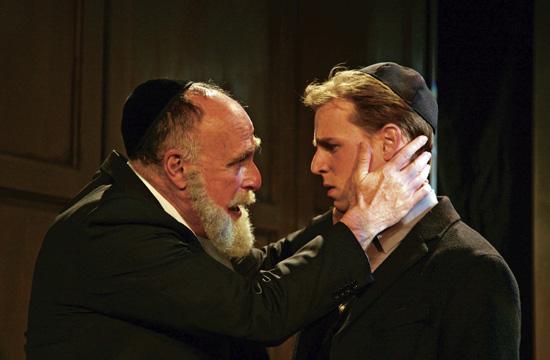 Meticulously researched, the story is about philosopher Baruch de Spinoza, who was born in November of 1632 to a successful merchant living in the Dutch-Jewish section of Amsterdam. He encouraged his son to become a rabbi and the play covers one, but historically significant event of Spinoza’s life. Bertrand Russell described Spinoza as “the noblest and most lovable of great philosophers.” Indeed, his belief system, Spinozistic or Naturalistic School of Philosophy is the fundamental foundation of Hinduism, Buddhism, Science of Mind, and the New Age Movement, which in a nutshell believes that, “God is all and all is God” and tolerance and benevolence are encouraged.

The play begins with an address to the audience, who are supposed to be congregants of the synagogue, by Abraham van Valkenburgh, a regent of Amsterdam played with the right amount of distain and determination by Mark Bramhall. He is to conduct a hearing or inquisition as to the accusation that Spinoza (“Bento” in Portuguese) is an atheist who holds unorthodox opinions and associates with “free thinkers,” the penalty for which would be excommunication or (“kherem”) from the Jewish community. The initial meeting takes place in the meeting room of Amsterdam’s Portuguese Nation with the playwright creating circumstances that very likely occurred.

A discussion takes place between van Valkenburgh and Saul Levi Mortera, Chief Rabbi of Amsterdam, who is Spinoza’s teacher and mentor. He is devoted to him, enjoying a close, almost grandfather/grandson relationship. Richard Fancy plays the rabbi and gives a spellbinding, deeply layered, emotional performance capturing the torment of a decision he might be forced to make. He reluctantly summons Bento, played by a most talented Marco Naggar, who delivers a commanding performance, to appear and the verbal battle of ideologies begins. The rabbi defends him at first and when van Valkenburgh accuses Bento of being slippery, Mortera says, “You can’t prosecute someone for being slippery or you’d have to prosecute the whole population.”

Bento denies being an atheist and indeed postulates that all of life is God and God is all of life and that there is no separation between nature and God – a theory that both the regent and rabbi reject. Throughout the hearing, Bento systematically dismantles the traditional belief system – from the authenticity of the Hebrew Bible to rituals and mores, to denying the existence of Heaven or Hell, all the while repeating over and over that, contrary to the traditional biblical concept of the deity, he believes in a God that is impersonal and abstract and not interested in the fates of human beings. He also believes there is a unity of the mind and body and denies the immortality of the soul. He insists he is a good Jew and loves God and that his purpose is to expand the consciousness of the Jewish community.

Bento debates the position of Jews in Amsterdam and the restrictions imposed upon them as to how they are allowed to live. Fearful of what might happen to Bento, in a stunning scene between the two of them, the rabbi pleads with him to “Find satisfaction in life as it’s imposed on us.” He also confesses that he, too, has doubts, and acknowledges that the agreement with the city is flawed, but necessary, and that ultimately Bento is destroying everything he believes in and he cannot allow that. He pleads with him to “Cut a deal and live happily ever after,” which Bento rejects.

Again, although historically undocumented, the playwright creates a deep love between a conflicted Gentile Clara van den Enden and Bento who tells her he could never marry her but that doesn’t stop him from loving her. Lovely Kate Huffman captures Clara’s torment in the stirring, heartbreaking testimony she is forced to give, furthering Bento’s potential damnation. Three other characters participate in the inquisition – Gaspar Rodrigues Ben Israel, a parnas (trustee) of the congregation, played extremely well by Shelly Kurtz whose emotional torment is palpable. His wonderful line “He’s not a Jew; he’s a Presbyterian” afforded momentary comic relief. Todd Cattell plays Simon de Vries, Bento’s good friend who betrays him, but eventually vacillates in his judgment of Bento’s philosophy. The last character is that of Spinoza’s angry half sister Rebekah, played quite stridently by Brenda Davison who, although that transition was not quite clear, likewise, experiences a change of heart and retracts her contempt for her half brother.

The philosophical/religious/metaphysical debate, that is the spine of the play, could have become monotonous and pedantic, but instead, becomes increasingly powerful, ultimately culminating in the harshest possible judgment imposed upon Baruch de Spinoza.

The utilitarian set design by Stepanie Kerley Schwartz uses the space well, with it functioning both as the meeting room and interior of the synagogue, but she must receive a major demerit for the ridiculous, jarring out-of- the-period “costume” worn by the model handsome Todd Cattell – designer blue jeans and jacket – straight off the cover of a Hollywood magazine. Mark Bramhall’s suit was inappropriate as well, but at least it wasn’t disruptive. In theatre, you ask the audience to suspend its disbelief and take a journey with you through space and time. Dressing only some of the actors in modern dress in a period piece immediately removes the audience from that time frame. That said, the rest of the cast, although not entirely in period costumes, were at least attired in such a way as not to shatter the texture of the century in which this drama takes place.

A familiar director in Equity Waiver theatre, despite the costume gaff, kudos to director Elina de Santos who did a masterful job with this complicated material, using the house as well as the stage in her interesting staging. She kept the action moving, but at the same time gave the actors the space to delve deeply into their characters, allowing for moment-to-moment beats to be fully actualized, resulting in this talented ensemble giving powerfully restrained, organically truthful performances. The shocking outcome of this historic event is a matter of public record and makes for a spellbinding evening of theatre.