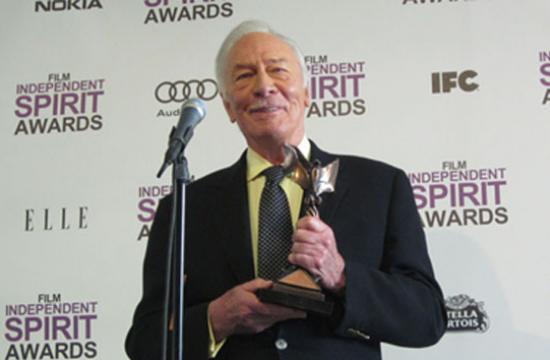 Santa Monica beach once again was the setting for the 27th annual Film Independent Spirit Awards on Saturday, which honored independent filmmakers who seek financing independent of the studio system, and therefore are not constricted by studio demands, allowing them to make films that are true to their artistic vision and have achieved greatness as independent filmmakers.

With Seth Rogen presiding over the amusing proceedings, celebrity guests and honorees showed up for lunch in the familiar Big Tent where a most relaxed ceremony was held, including no language restrictions of which Rogan took comic advantage in both his prepared jokes and off-the-cuff remarks. The “anything goes” is at the heart of the Spirit Awards and is what makes it unique.

Fans who wanted to get a glimpse of some of their favorite movie stars were welcome, cameras in hand, as viewing barriers were set up along the path leading to the tents. Some of the stars greeted the fans, signed autographs, and posed for pictures.

Among the films nominated for this year’s Spirit Awards were some of the most outstanding films of the year – “The Descendants,” “Take “Shelter,” “Drive,” “Beginners,” “50/50,” Martha Marcy May Marlene,” “Win Win,” “Beginners,” Margin Call,” which won Best First Feature, and “The Artist,” which took home multiple awards including Best Feature, Best Director, and Best Male.

Following are highlights of comments from a few of the winners during a brief Q & A in the press tent:

Christopher Plummer took the Best Supporting Male prize for his work in “Beginners.”

When asked if he was surprised that he received so much attention and won awards for his work in this film, he said, “It does surprise me a little bit because the film has not been seen by a tremendous amount of people because it opened so long ago.”

He added that he hoped the film would be re-released so more people can see it. As far as researching for his role, he said, “The whole crew was gay,” which resulted in gales of laughter.

He said everything he needed was in the incredible script adding that write/ director Mike Mills created a very relaxed set. When asked if he was getting more work as a result of the film, he said, “Well, I have to because I could croak at any minute.”

Will Reiser’s “50/50” won for Best First Screenplay and said, “I had no idea how it would connect with people because it’s so personal. He added, “People who have been affected by cancer related to it and that was particularly gratifying.” He told a story about a woman who had never spoken about her cancer, but after seeing the film, talked about her experience for the first time.

Shailene Woodley took home the Best Supporting Female award for her work in “The Descendants,” and said, “I am very grateful for the experience and it’s taken me to a whole other level.” She said George Clooney was a delight to work with and that he taught her a lot. When asked how her life has changed, she said she hasn’t had time to do laundry and now can catch up with the rest of her life, for a while, at least.

Michelle Williams won Best Female award for her work as Marilyn Monroe in “My Week With Marilyn.” As to how she developed her character, she said she did a lot of research, including books, films, and YouTube. When asked if it was harder to find the character, considering what an icon Marilyn Monroe is, Williams said, “I think whatever you’re working on at the moment feels like the hardest thing you’ve ever worked on.” On her rise to stardom, Williams said, “It’s about the work. I keep my head down and do the work which is a very Montana attitude.” She quoted an Amish saying, “Eyes the ground and heart to the sky.”

“The Artist” director Michel Hazanvicius talked at length about his association with Harvey Weinstein and how Weinstein made it possible for this film to get made and achieve such wide critical acclaim. “We made this movie as a tribute to Hollywood cinema and are overwhelmed at its success.” When asked if he was exhausted, he said, “It’s not the worst job you can have.”

As for the future of the non-profit Film Independent organization, Sean McManus and Josh Welsh have been recently appointed as Co-Presidents to oversea programs that nurture independent filmmakers and to have their works reach a wider audience.

So once again, thousands of dishes were cleared away and the tents were folded up until next year when the Independent Spirit Awards once again returns to Santa Monica beach to bring its own special brand of celebrating the world of outstanding independent filmmakers.“

And The Winners Are:

My Week with Marilyn

Other awards included the Robert Altman Award which went to “Margin Call” and the John Cassavetes Award for best first feature made for under $500,000 which went to Dee Rees for “Pariah.”