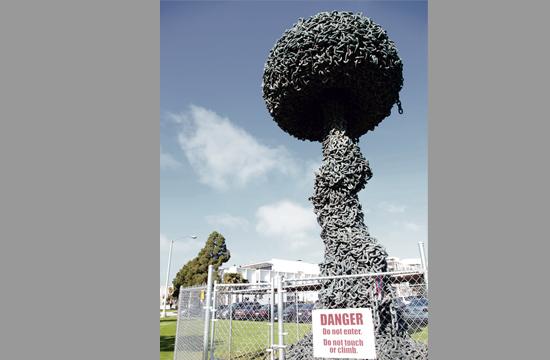 Let me lay my cards out on the discussion table right away: I think it’s a no-brainer to want the city to preserve Paul Conrad’s sculpture “Chain Reaction,” but a no-brainer from a possibly romantic and even philosophical viewpoint. And you often can’t run a city on romance and philosophy. Even Knott’s Berry Farm, which is essentially a small city filled with delight-giving roller coasters and charming Peanuts characters, keeps one eye closely focused on money and the cost of things.

What does the Paul Conrad sculpture say that is so important? Essentially that war is not good for children and other living things, just like the preachy but true old anti-war poster. And that one nuke brings two, and begets a chain reaction. Those messages were solid back in the day, and are even more so now as we observe Israel and Iran creeping toward bloodshed over the issue of nuclear weapons.

But to “save” or preserve the sculpture will cost somewhere between two estimated extremes of $227,372 and $423,172. Should a city, any city, spend that kind of money on art at a time when economic conditions are literally pushing families all over America out of their homes? Put another way, think of the heat and fire the city of Santa Monica might draw following inevitable news stories ensuing from the spending of a quarter to a half-million dollars on “Chain Reaction” or even any piece of public art at this time.

That last thing brings up a distinction worth noting. Were we discussing the preservation of The Little Mermaid in Copenhagen, a reference to Hans Christian Andersen and a major tourist attraction, we’d be on dramatically different ground with this. But let’s follow that line, which is basically asking ourselves, “What does ‘Chain Reaction’ mean to us and how far are we willing to go to save it and keep it here?”

Is Conrad’s sculpture great fine art? No, but with a caveat: Like Warhol’s Tomato Soup Cans you can argue all day about execution and ‘beauty,’ but not at all about importance. Now, if there is such a thing as a caveat inside a caveat I’m reaching for it here: The importance in this case is not historical like Warhol’s bringing into being “pop” movements but rather that the city of Santa Monica embraced the sentiment and message of “Chain Reaction;” we stood behind it. I would argue that there is a level of preservation as it applies to what a city will save that has everything to do with who and what we say we are. I can’t honestly think of any one thing, besides our beautiful beaches and keeping their waters clean that speaks as definitively to a set of shared values as this sculpture.

Although I’m sure those other things are out there. But for the sake of discussion on “Chain Reaction” can we concede that its meaning and message mattered to us then, and thus it matters to us now? Maybe that gets us to a consideration of the sculpture’s artistic satisfactions.

In the case of Conrad’s sculpture some may have an issue with the fact that it was never truly beautiful in the way that art can convey beauty. Or even in the way that the Civic Center, which we have acted to preserve, provides dynamic retro architecture. Conrad’s piece was intended, like his widely-respected political cartoon work, to convey an idea and like his cartooning there is a bit of whimsy involved in the expression. With “Chain Reaction” the cheeky but pointed quality comes not from Conrad’s cartoon drawing style but rather the fact that a nuclear mushroom cloud has been fabricated of chain links. Alas, to hold all that together there was a fiberglass core and hardware that time and sea air weather conditions have begun to break down.

“Chain Reaction” was able to make its home in Santa Monica because of an anonymous donor who, in 1990, anted-up $250,000 to help fund the project. There is a sense that someone might step forward again to preserve the piece, which, pending a vote by the City Council, will otherwise be offered to the Conrad family. They will also supervise any disassembling of the sculpture.

So let’s review: Somehow we’re going to have to find a large sum of money to preserve a sculpture that few agree constitutes important art historically but that many agree has become valuable in terms of both the statement the piece makes by itself and the statement Santa Monica makes in giving the piece a home. I believe both of these views have a confluence: It occurs when families walk past “Chain Reaction” at its prominent site in our city, and a parent is called upon to explain the possible meaning of the work to a child; a child who likely has not been considering their inheritance of a world in which nuclear weapons are still a horrible reality.

I have personally witnessed that happen, and it is in that moment that you can see “Chain Reaction” doing exactly what the highest, finest, and best art in the world is supposed to do. Paul Conrad’s sculpture may not survive in its Santa Monica home, but wherever it is it will put lie to the notion that every event of art need also be something of enduring physical beauty. Sometimes, art is doing the most for us when it asks a question. In this case, a modern and glib slug line at the base of “Chain Reaction” might read “Got Nuclear Death?” Yes, tragically, we still do. Saving this sculpture doesn’t just speak to the preservation of art; it speaks to the preservation of everything.