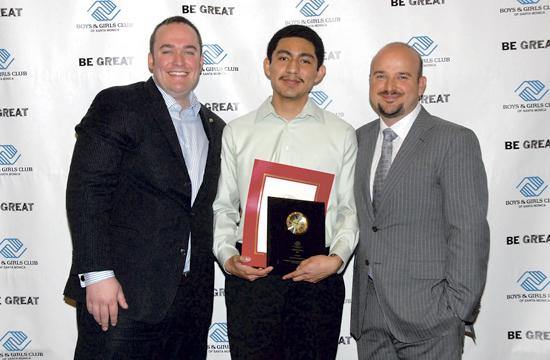 “I remember being seated in the back corner not knowing what was going on, but once I saw the person receive the Youth of the Year award, I wanted to be that person,” Ramirez said.

On Saturday, that goal Ramirez set in 2009 was achieved when he accepted the 2011 Youth of the Year award in front of more than 350 guests at SMBGC’s 44th Annual Youth of the Year Awards Celebration and Banquet.

“Now that I’m here, I want to go further with the club,” he said.

The 17 year-old Samohi senior was selected from four extraordinary local youth in recognition of his outstanding contributions of service to the Club and his community, and his exceptional leadership among his peers.

Aaron Young, CEO Santa Monica Boys and Girls Clubs, said the event was a special occasion to recognize and celebrate the accomplishments of its members.

“Every single one of our kids that was here that we honored today. They are an incredible person all on their own,” Young said. “Each one of them deserves to win this award. David is an amazing, remarkable young man who’s been through many struggles, and we feel that he’s the best person to be the spokesperson for the Club moving forward.”

As Boys & Girls Clubs of America’s premier youth recognition program, the Youth of the Year program honors deserving Club members for their academic and/or personal achievements, leadership skills, and outstanding contributions to their community as well as overcoming personal challenges and obstacles.

Ramirez will compete in March for the title of YOY for Los Angeles County – and potentially beyond – and will be eligible to receive scholarships along the way.

Ramirez is motivated by the need to pave a smoother path for his younger sister and make his hard-working parents proud.

He overcame a number of challenges – including obesity, low self-esteem, and a lack of academic focus to name a few – in large part because of his self-awareness and burning need to succeed.

He is actively involved in both the Pacific and Main Branches at SMBGC, participating in programs including CollegeBound, Keystone, and Leaders in Training. He aspires to attend USC and one day become CEO of a Boys & Girls Club.

If Ramirez wins at the County competition, he will receive a scholarship and can move on to State, regional, and national Youth of the Year competitions. Five regional winners will advance to Washington, D.C., to compete for the title of the Boys & Girls Clubs of America’s National YOY.

The national winner will receive an additional scholarship of up to $50,000 and will meet the President of the United States in an Oval Office ceremony.